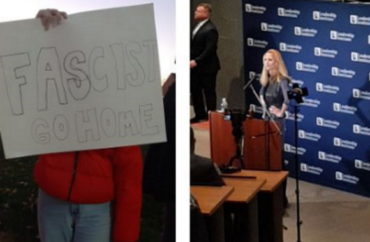 ‘Students among the disrupters will be referred for conduct violations’

Firebrand conservative pundit Ann Coulter’s attempt to give a speech last night at her alma mater — Cornell University — ended early after repeated disruptions and outburst from the audience in what some observers call an organized and successful heckler’s veto.

“The event lasted just a little more than 30 minutes, of which Coulter spoke for less than 7,” reported the Cornell Review, a center-right news outlet on campus.

Observers say Coulter, who was invited to speak at the behest of the Network of Enlightened Women campus chapter, decided to shut it down due to her frustration at the inability to speak without being aggressively interrupted.

Another video show two students chanting “no KKK no fascist USA” as they are escorted out by security. Other outbursts shown in videos include students blaring circus music and whistles on some sort of sound amplifier.

Organizers, who had anticipated mischief, made it so that “seats were limited to those who had registered online and the event was packed with security officers,” the Cornell Review reported.

But what appears to have happened, the Review added, is that protesters “seemed to be employing a chain tactic, beginning just as soon as the last heckler was removed, so as to continuously speak over Coulter.”

As The College Fix previously reported, Cornell University had denied a student petition to disinvite Coulter.

And at the beginning of Coulter’s talk Wednesday evening, the dean of students warned the audience that disruptors would be removed and referred to the Office of Student Conduct, the Review reported.

“Eight college-age individuals were removed from the auditorium following Cornell protocols. All Cornell students among the disrupters will be referred for conduct violations,” Joel Malina, vice president for University Relations at Cornell, told Campus Reform.

“Cornell apologizes to Ms. Coulter and all members of the audience who hoped to hear her remarks,” he added. “The inappropriate behavior displayed by disrupters does not reflect the university’s values.”