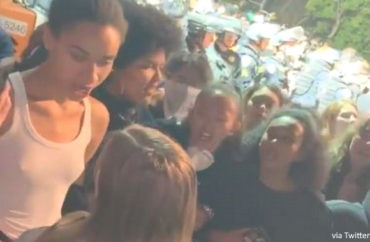 Ann Coulter’s appearance at UC Berkeley on Wednesday night drew a massive crowd of far-left protesters and included five arrests and one injury — although the firebrand pundit and best-selling author was able to deliver her “Adiós, America!” speech hosted by the Berkeley College Republicans.

“Between 1,500 and 2,000 demonstrators chanted slogans outside the event, where police put up a large water-filled barricade. Some demonstrators harassed people trying to enter the building, yelling at them and pushing them,” reports the Associated Press.

The protesters — which included students, as well as some members of the militant left-wing activist groups Antifa, Refuse Fascism and By Any Means Necessary — also reportedly chanted “Berkeley is a sanctuary, no Coulter, no ICE,” “Go home,” and “No justice, no peace, no racist police.”

“We’re here to show our support for DACA and also to protest white supremacy,” UC Berkeley junior Hamid Hakimi told Berkeleyside, which noted he was “part of a ‘human chain’ of protesters who were trying to block people from entering the hall to hear Coulter.”

In response, the Berkeley College Republicans tweeted out: “We would like to thank all our attendees, especially those who got punched and kicked while waiting outside. Your contribution to protecting free speech on campus is invaluable.”

Videos posted to social media captured some of the chaos:

UNHINGED: leftist try to physically intimidate @BerkeleyCRs as they enter to set up for the @AnnCoulter event. pic.twitter.com/PEpCqbwkKk

“Get the f— out of here, bitch!” Far-left protesters block and scream at woman attempting to get to Wheeler Hall for the @AnnCoulter event. #antifa pic.twitter.com/xroAvCWT9l

Left-wing protesters at @UCBerkeley block a woman from entering Wheeler Hall for the @AnnCoulter event. A protester then pretends to be with the event organizers in order to steal the woman’s ticket. pic.twitter.com/z4YrZXsVqX

More than 2000 protestors showed up outside our @AnnCoulter event tonight but we were undeterred. We would like to thank all our attendees, especially those who got punched and kicked while waiting outside. Your contribution to protecting free speech on campus is invaluable! pic.twitter.com/p10GdhIFh7

The Daily Californian campus newspaper, citing UC Berkeley spokesman Dan Mogulof, reported that “five protesters were arrested on charges including wearing a mask, resisting arrest and battery on a peace officer, and one man was injured.”

“Protesters blocked event attendees from entering the event and formed a human barricade around the entire building at 9:30 p.m. One attendee jumped over police barricades and another had their ticket ripped by a protester. Mogulof said no more than a few people were unable to enter because of the protest,” the Californian reported.

“Of those arrested at the demonstration, three were cited and released at the scene. One student was released from the Berkeley Police Department Jail Facility without charges, and another, arrested on charges of battery on a peace officer and trespassing, was bailed out of Berkeley City Jail on Thursday.”

AP reports that the person who was injured had scuffled with a protester and was taken to a hospital as a “precautionary measure,” but the injuries are reportedly not serious.

Coulter, for her part, was able to have a bit of fun with the melee, tweeting: “Last night, simply for trying give a speech, I was threatened by 2000 loons & all I could think was: ‘How can we keep Eric Ciaramella safe?'”

Last night, simply for trying give a speech, I was threatened by 2000 loons & all I could think was: “How can we keep Eric Ciaramella safe?”

In 2017, Coulter cancelled a scheduled talk that was also hosted by Berkeley College Republicans due to safety concerns.