The graduate student government at Georgetown University is currently in the grip of a bizarre impeachment scandal, one involving numerous offensive tweets, the looming removal of a student politician who is also running for statewide office, and accusations of assault stemming from what one student representative claims was merely a “boop on the chest.”

At the beginning of this month, the Georgetown University Graduate Student Government, known on campus as GradGov, opened a motion to impeach its vice president, Heerak Christian Kim, due to a series of inflammatory posts discovered on Kim’s Twitter feed. Those tweets variously criticized gay activism, promoted anti-Semitic canards and even suggested “putting Muslim Americans in concentration camps.”

The campus newspaper The Hoya reported on Feb. 7 that the GradGov executive board “unanimously” condemned the tweets; in that statement the board said it was initiating a petition seeking Kim’s impeachment following his refusal to resign. That petition subsequently received enough signatures from GradGov senators to initiate an impeachment process against Kim, The Hoya later reported.

At the same time, Kim, who is also a candidate in the Republican primary for the 8th congressional district in Virginia, filed a bias complaint against two GradGov officials accusing them of religious and political discrimination. He claimed the governing body’s president, Lewis May, had assaulted him during an exchange outside a GradGov meeting; he also accused the organization’s supervisor, Owen Agho, of collaborating with May to bar him from the meeting and later ignoring Kim’s report on the alleged assault.

May, who did not respond to queries from The College Fix, told The Hoya earlier this month that he did not actually assault Kim when he confronted him outside the meeting. “Apparently at one point in the conversation I, like, booped him in the chest, sort of for emphasis, and he was like, ‘Oh, you physically assaulted me,’” May told the paper.

Kim, who also did not respond to requests for comment, later filed a police report against May. The GradGov president’s lawyer has denied the charge, claiming Kim is “abusing the legal process.”

GradGov had scheduled the hearing to take place last week on Feb. 20. Yet the student government subsequently cancelled that meeting, apparently postponing it indefinitely.

Vaughn Shirey, a research assistant at Georgetown, posted on his Facebook account last week that GradGov had scrapped the planned hearing outwardly because of the “religious and political discrimination claim” Kim had filed with Georgetown’s Office Of Institutional Diversity, Equity & Affirmative Action.

Shirey said that Kim also “sent notification to GradGov senators that any participation in the impeachment process…will result in their inclusion in the IDEAA discrimination case.”

GradGov said in its public statement earlier this month that it “categorically condemn[ed] the comments made by Mr. Kim’s account.”

“[Kim’s] messages are absolutely incompatible with his role as Vice President and GradGov’s broader mission of creating a safe and welcoming campus environment,” the letter read. It included screenshots of Kim’s tweets, all of which are still publicly available online.

“Is the National Republican party going to become a SLAVE of the JEWS and go after every Republican leaders [sic] whom the Jews call ‘anti-Semitic’?” Jesus is anti-Semitic because Jesus Christ called Jews ‘Children of the Devil’ in the Gospel of John!” one tweet reads.

“Do you think Iowa’s farmers will experience adverse Acts of God if they support Pete Buttieg [sic], who pushes transgenderism and gay rights in America as his top priority? No Rain? Harsh weather? Locusts? Look at what Act of God is doing in Australia,” another reads. A third speculates whether God will “give cancer to politicians…who aggressively push gay marriage.”

Criticism of Kim has extended beyond Georgetown’s campus to his state political candidacy. A spokesman for the Republican Jewish Coalition told the Jewish News Syndicate on Friday that “[Kim’s] antisemitism has no place in [the] party, and shouldn’t have a place in American society. Mr. Kim should end his candidacy and put his focus back into his continuing education.” 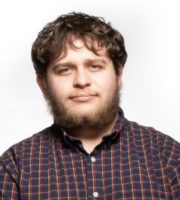 About the Author
Jakob Glogauer
Jakob Glogauer is a sophomore at Ryerson University, majoring in radio and television arts. In his spare moments, he spends his time in engaging with the world on pro-Israel activities; he also works as a student ambassador for PragerU. In addition to The College Fix, his work has been published by The Post Millennial.