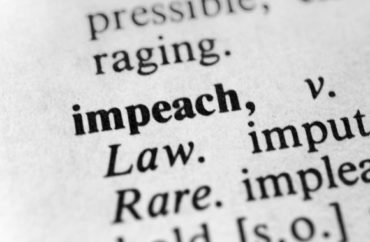 The Diversity and Inclusion Committee in Emporia State University’s student government is pledging to impeach a student official for refusing to resign after using the phrase “illegal aliens” on Facebook.

In the now-deleted public post, Vice President Michaela Todd explained why she was voting for Republican gubernatorial candidate Kris Kobach, who eventually lost the race.

One of his platform planks was to “put Kansans first, not illegal aliens,” by reducing taxpayer funding of welfare used by such immigrants. Todd later apologized, saying she didn’t know “illegal aliens” was offensive to some people.

A motion to begin impeachment proceedings against Todd failed at a student senate meeting last week, leading the committee to give her until Monday night to resign.

After she refused, the committee said Monday night it would press forward on impeachment again at this week’s meeting.

Todd told Campus Reform earlier Monday that she would continue serving because “I am committed to creating a diverse campus at ESU, not only in culture but in thought as well.”

The public university administration did not return Fix queries asking whether the student government has the authority to impeach an official for speech made outside of her position and duties.

One student is arguing that the student body’s constitution doesn’t allow for impeachment in Todd’s situation.

‘Dehumanizes people we strive to represent’

After receiving backlash for the Nov. 6 post, including from the Multicultural Greek Council, Todd deleted it and issued a public apology Nov. 7.

“[M]y sole intent was to reiterate” the Kobach platform and she “was not aware of the negative connotations to some of the technical legal terms used in his platform,” Todd wrote in an official statement to students.

She thanked students “who pointed out how the specific phrase [‘illegal aliens’] is offensive,” adding that she wasn’t trying to “offend or hurt anyone.” Todd will put her oath to serve the university “ahead of my own personal ambition.” 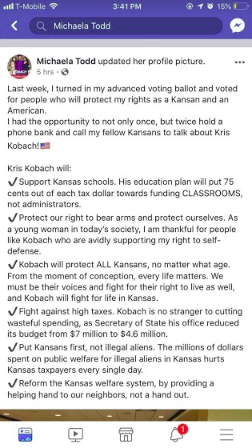 Even though a screenshot of her Facebook post from The Bulletin student newspaper (left) shows it was public, Todd characterized it as “private.”

The Senate failed to reach the two-thirds majority in a Nov. 8 impeachment vote, with 11 in favor of impeachment, seven against and three abstentions, according to The Bulletin. It said its own survey of the room, with more than 35 students attending, revealed that most “were not there in support of Todd.”

The Diversity and Inclusion Committee read a statement at the meeting, according to the Bulletin.

Todd’s “illegal aliens” language “dehumanizes people we strive to represent,” and the committee “would encourage” her to announce her intent to step down by Nov. 12 and officially leave her position on Dec. 14. That monthlong span would involve a training period for a replacement vice president.

If she refused, the committee would seek the support of two-thirds of the Senate to start impeachment proceedings at its Nov. 15 meeting. (A final vote would require three-fourths’ support on Nov. 29.)

She doesn’t use ‘inclusive, gender-neutral language’

The committee gave two pages of reasons for Todd to step down, including that her words might have a “ripple effect” if she shares her political views publicly and she didn’t provide “sources” in her Facebook post.

But it also made clear that it has an earlier grudge against Todd.

It has passed out “Diversity Training Packets” at student government meetings, and has “continuously felt as if they were ignored” by Todd and “not put into practice.”

The committee said she did not use “inclusive, gender-neutral language” in meetings and faulted her for unspecified “other daily occurrences.”

The committee said it’s a proponent of free speech, but that Todd should be “cognizant” of how her words can “affect the populations” she represents. “We are in no way trying to censor” her views, it continued, but then stated:

This is not a criticism of VP Todd’s political beliefs, as varied beliefs contribute to a more diverse campus; however, when those beliefs are tinged in hatred and dehumanization, we believe there is not a home for them on campus.

“Latinx students are not willing to attend” Senate meetings because of the “campus climate being broadcasted [sic],” the committee continued:

[W]e cannot stand for acts of ignorance on our campus – no matter how small. … To remain in office would send a message as tolerance to these words, and the Diversity and Inclusion Committee cannot allow that to happen.

Please see the statement below from the ASG Diversity and Inclusion Committee. pic.twitter.com/dEBV2oOvXS

Look at our constitution first

President Webb piled on Todd the next day, saying her original Facebook post “included dehumanizing rhetoric which does not promote or establish inclusivity.”

He minimized the “dictionary definition” of the phrase “illegal alien” and said it has “deeper meanings” in this “social context.” Webb also raised the possibility of removing Todd through a recall election.

An unsigned staff editorial in the Bulletin called Todd’s statement “a serious offense” because the term “illegal” is “something that only applies to acts, not people.” It said various groups have been “put into ‘illegal’ categories” through American history, including women, Irish, Muslims and transgender people.

“It’s time to start representing the people on this campus,” the editorial said. “All of the people. Not just the ‘legal’ ones.”

Not all students are denouncing Todd. Student Derrick Barger posted a petition on Twitter on Nov. 9, asking students to publicly voice support for Todd during the impeachment process.

Student Jarett Hack tweeted at the student government, warning that it has “no right to to exclude [Todd] from participation in the organization unless she breaks a law specified by the federal or state government.”

He said the term “illegal alien” was actually “politically correct.”

Various parts of ESU are ignoring the voices of those who back #OurVP . To combat this, the below petition has been started so we can put forth a strong united voice stating our position. Please DM me or email me @[email protected] if you want your name on the petition below pic.twitter.com/7kEHxX0uC6

impeach her. Under the Constitution of The Associated Students of Emporia State University Article 1 Section 2.1 you have no right to exclude her from participation in the organization unless she breaks a law specified by the federal or state government, especially under the

The Diversity and Inclusion Committee notified the student body Monday night that it would proceed with its impeachment threat because Todd had formally refused its offer.

“I took an oath to represent the students of Emporia State University, and representation is not about perfection,” she wrote in a statement posted by the committee. “It is about conversation, learning, and coming together as a unified body. Together is how we will learn and overcome adversity.”

She reiterated that her actions were not motivated by “personal ambition.”

Conservative students have occasionally been targeted with impeachment efforts for their views.

Earlier this year the University of Illinois student government impeached an official for participating in an event that built a “wall” to highlight the “victims of illegal immigration.”

A month earlier, Texas State University impeached its president for calling for the defunding of the student paper over a column that said “white death will mean liberation for all.”

Two years ago a University of Southern California student official escaped impeachment but lost his remaining stipend, in part because he invited anti-feminist firebrand Milo Yiannopoulos to campus as College Republicans president.

The USC administration told The Fix then that it would “guide” the student government during impeachment but did not answer whether it respects the free speech of all students.