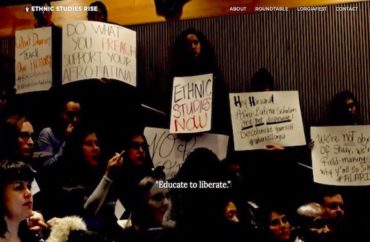 Following Harvard’s denial of tenure to a Latina professor, multiple academics have banded together to form a “public humanities effort” in support of her and of the scholarly field of ethnic studies.

Harvard Associate Professor Lorgia Garcia Peña teaches romance languages and literature at the elite Ivy League school. She is the author of multiple articles, mostly written about race, and of a book titled “The Borders of Dominicanidad: Race, Nation, and Archives of Contradiction.” The courses she has taught at Harvard include “Diaspora Archives: Transnational Stories of Immigration and Citizenship in Historical Perspective” and “Introduction to Latino/a Literature in the United States.”

Students staged another rally less than two weeks later, this time occupying the school’s Office of Admissions and Financial Aid. The roughly 50 students who attended protested Harvard’s lack of an ethnic studies program.

In addition to the protests, Harvard students also wrote a letter supporting Garcia Peña and condemning the school’s denial of her tenure; the document garnered 200 student and 30 student groups’ signatures. Another, separate letter written by “Harvard affiliates and other academics” had nearly 1,000 signatures, according to The Harvard Crimson.

Garcia Peña’s tenure denial was further protested by several academics from universities across the country, who have banded together to form the group “Ethnic Studies Rise.” This coalition describes itself on its website as a “public humanities effort to honor the extraordinary contributions of scholar Dr. Lorgia García Peña.”

In an email to The College Fix, Roopika Risam, a professor at Salem State University, described the initiative as “an unprecedented example of digital organizing that continues to raise awareness about Dr. García Peña’s case, as well as the broader challenges that scholars of ethnic studies face in universities.”

Risam initially reached out to The Fix unprompted in an attempt to promote the organization. CCd in that email was Alex Gil, a professor at Columbia University and one of the founders of the project. Gil did not respond to multiple followup emails from The College Fix seeking more info about the project. Risam herself said she was not directly involved with the organization.

According to its website, the initiative is hosting an ongoing “roundtable,” using “paired and moderated email conversations” regarding ethnic studies and the work of García Peña. Three of those conversations total were uploaded during the month of December. One features Roopika Risam, who argues in the discussion that American higher education “emerged to educate a class of white men to take up self-appointed positions as leaders of a new nation” and that “the university is thus a defender, a creator, and an arbiter of racial hierarchy.”

The project also promoted an online rally it called “Lorgiafest,” meant to encourage people to read García Peña’s book and tweet about it on Dec. 20, using the hashtag #lorgiafest. To assist in the event, Duke University Press made the electronic version of García Peña’s book free and lowered the hardcopy’s price by thirty percent.

On the day of the “Lorgiafest,” many individuals tweeted their support for García Peña, with apparently many hundreds of tweets containing the hashtag. Duke University Press confirmed the popularity of the event in a Twitter comment, writing that the book’s “print version is out of stock due to high demand” and directing users to the ebook.

García Peña herself responded shortly thereafter. “So incredibly grateful for your engagement with my work. Humbled. Honored. Graciassssssss,” she wrote on Twitter.

Asked why García Peña wasn’t accepted for tenure, Harvard spokesman Jason Newton refused to explain, writing in an email to The Fix that Harvard “does not comment on individual tenure decisions.” Newton did, however, outline Harvard’s intensive process through which individuals must go to achieve the renowned academic appointment.

It includes a committee review of the professor’s submitted dossier; solicited letters comparing the candidate’s achievements against other leading scholars; a review, and subsequent vote, by other, already-tenured academics deciding whether promotion will be recommended; tenured scholars writing confidential letters to the Dean of the Faculty of Arts and Sciences; finalization of the professor’s case statement and dossier by the professor’s department chair and the chair of the review committee; a decision by the full Faculty of Arts and Sciences Committee on Appointments and Promotions regarding whether or not the tenure request should be forwarded to the school president for final approval; and the Harvard University president making the final decision on tenure.

MORE: Professors slam ‘ethnic studies’ report: ‘This is not a serious study’