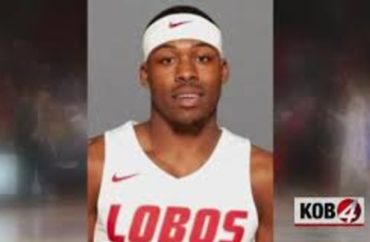 Second due process lawsuit against UNM in less than a week

Joseph Caldwell, a University of New Mexico student, has been kicked out of campus housing, stopped from registering for spring classes, and banned from playing on the basketball team.

His crime? He has only been accused of one at this point: battery. Caldwell “has not been arrested or charged, much less proven guilty in a court of law,” according to a federal lawsuit filed against the public university earlier this month.

It’s not clear that UNM even has authority to investigate the allegation, the suit claims: The accuser is not a student and may not live in the state.

The taxpayer-funded university has not followed its own procedure to determine whether Caldwell (above) violated its code of conduct, the suit alleges. He was deprived a hearing where witnesses and evidence against him could be heard and challenged, as well as the opportunity to appeal.

Caldwell is suing the Board of Regents, the university-owned housing nonprofit Lobo Development Corporation and Dean of Students Nasha Torrez for violating his due process rights.

He also claims that board and Lobo breached their contracts with him. In return for Caldwell agreeing to play basketball for the university, “UNM has contracted to provide Plaintiff with access to its undergraduate degree programs.”

By preventing him from being able to continue his education, the university is not following up on its side of the bargain, the complaint argues. Lobo also “failed to honor its obligation of good faith and fair dealing” by breaking his lease.

It’s the second due process lawsuit filed against the university for a disciplinary investigation in less than a week. Prof. Nick Flor filed suit Dec. 31 after the university blamed him for a student’s attempted blackmail and suspended him for a year.

Evicted for ‘unlawful action’ (without being charged with a crime)

On Dec. 19, Caldwell received an email from UNM notifying him that he was “hereby interim banned” from campus except to seek medical care and take his “in-person courses for Spring 2020 semester.”

The problem? At this point, Caldwell has registered for only one class, and this ban prevented him from signing up for any more that meet on campus.

The Albuquerque Police Department took a report on battery allegations against Caldwell three days earlier. The email stated that the allegations were “under the jurisdiction of the Office of Equal Opportunity” of the university, and that Caldwell would be unable to contact the dean of students’ office during the Dec. 21-Jan. 1 holiday break.

He met with the Office of Equal Opportunity briefly and denied the charges against him. Afterwards, Dean of Students Torrez “reiterated that he was suspended and that she would make the decision whether or not to continue his indefinite suspension at some unknown later date.”

Torrez is married to Raul Torrez, district attorney for Bernalillo County, where UNM is based. That potential conflict of interest resulted in the referral of the battery case to the District Attorney’s Office in Alamogordo, the Santa Fe New Mexican reported.

This scenario should sound familiar to anyone who has been following the case of @UNM's egregious treatment of @ProfessorF, in which a lack of due process and inexcusable delays have also left Prof. Flor in an untenable position.

The same day he was banned from campus, Caldwell received an eviction notice from Lobo requiring him to remove all of his belongings from his university-affiliated apartment within three days.

It claimed that his “unlawful action causing serious physical harm to another person” violated the terms of his lease. According to his complaint, Caldwell has not been charged with a crime.

Four days after it served the eviction notice, Lobo forced Caldwell out of his apartment, even though he had been told he would not be evicted until after Jan. 3. The university would be open on that date, and presumably he could properly address the charges against him at that time.

The suit says Caldwell has not received a written complaint of detailed allegations from the university, any evidence or discovery regarding allegations, the identity or statements of adverse witnesses, or an opportunity to address the allegations with “confrontation rights.”

All are required by UNM’s own procedure before findings can be submitted to the dean of students.

Caldwell says that he “has had no opportunity to appeal any such findings, as there are none to appeal.”

UPDATE: One of the defendants is married to the prosecutor who would ordinarily investigate the battery claim against Caldwell. The article has been updated to include this. The original article also gave the incorrect time period during which lawsuits by Flor and Caldwell were filed. They were the same week.