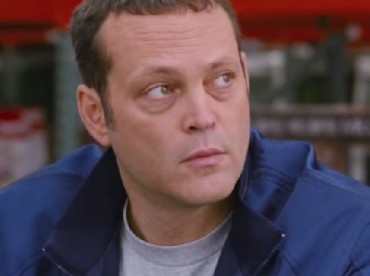 LOS ANGELES – Actor Vince Vaughn headlined a Young Americans for Liberty conference at UCLA over the weekend, offering candid thoughts and words of encouragement to an excited audience of 250 or so college students who lead libertarian efforts at campuses across California.

“I think the message of individual liberty and peace is contagious,” Vaughn told the students Saturday, prompting applause and cheers.

Vaughn, a longtime Ron Paul supporter who has been vocal about his libertarian beliefs, made his comments in a Q&A-style appearance, also weighing in on topics such as Hollywood, Rand Paul, Edward Snowden, and libertarian tenets.

“Raise your kids to think for themselves and have respect for both their own individual thoughts and other individuals,” Vaughn, a father of two, said when asked about principles the movement should spread.

Although he did not specifically address political correctness on campuses, he alluded to it while addressing the topic in general.

“There is a challenge because you are up against such a system in place that kind of indoctrinates, if you will, that this is good and that is bad,” he said. “A lot of that to me is really laughable. If you can sit with someone individually and just point out how crazy some of these things are, right?”

“I feel bad for the kids who are going there, their parents are just kind of sending them there,” he added. “But I think a lot of kids also will kind of wake up at some point and say, ‘This feels a little suffocating, some of these ideas feel like it’s really being jammed down my throat,’ which is a good reason to kind of question it, right? Like, why is every week, you know, global warming week?”

The students, in attendance for YAL’s California State Convention, laughed at that and many other quips the actor threw out during his half-hour appearance. Wearing a black leather jacket, graphic T-shirt and jeans, Vaughn seemed pretty relaxed as he sat on stage in a directors chair and fielded questions from a moderator and the audience.

“I think Snowden is great,” Vaughn said, prompting applause and cheers. “He was sharing information with the American people. He was letting us know how far the abuse of liberty has gone.”

“It wasn’t like he was selling it to make money from someone who had bad intentions for the nation,” he added. “It was a wake-up call to all of us to find out just kind of how far they were going. I think he is a hero. I think he is a very brave person who is very principled who took it upon himself to let the American people know. The fact that the government responded pretty strongly to it kind of lets you know maybe they see us more as an adversary than they would present.”

He was also asked about Republican Sen. Rand Paul, who is running for president. Vaughn praised Paul, but stopped short of any official endorsement of his candidacy.

“I have gotten to know Rand through Ron and I have found him to be very consistent on a lot of the issues where liberty is concerned, and liked him very much,” Vaughn said. “There are some things I wasn’t totally understanding of [regarding Rand Paul’s politics, but] … he is the candidate that is currently running that I am most sort of aligned with in sort of his thoughts and philosophies.”

“But to me, Ron was the most consistent in the tradition of liberty,” Vaughn said, prompting another wave of cheers from students.

Hollywood was another subject that came up often, including whether he has talked about his political beliefs with co-stars. Vaughn said he does, and added they can be fruitful conversations at times.

“They start to realize it’s really the principal you are talking about … whether it’s drugs or freedom of speech, you can decide for yourself what your comfort zone is, but the principle of it is, you know, should people be allowed to say what they want, and I think that can be contagious to people as they start to understand it,” Vaughn said. “Once people realize that a lot of government action is forced, that you’re really empowering people to decide what is OK or not OK, that usually leads to some people getting mistreated and some people abusing it and causing more problems than solving.”

And while Vaughn acknowledged he likes to “debate them and sometimes aggravate them as well,” he said the conversations often come back to the same sticking point.

“If you kind of stay in the logic of it, they usually always end up with the same thing, which is: ‘We have to try something,’ or ‘I just don’t believe we can trust individuals that much.’ At which point I always say, ‘Well, who runs the government?’”

Yet Vaughn mentioned he isn’t looking to be the face of the Libertarian Party or lobby people to join its cause.

“My thing isn’t necessarily to try and get out there and try to get people to join the movement,” he said. “I find it important to be consistent with what your truth is and to be direct about that in conversations.”

He said it’s gotten him some praise on the down low in Hollywood: “I have people come up to me, because I have spoken about it, and they are always like, hush hush, like: ‘I am so glad you said something, I can’t say anything, but I am with you.’”

When pressed on whether libertarians should do more in pop culture to argue their cause, Vaughn said he isn’t out to push his beliefs through projects. He acknowledged some movies do.

“I think it’s important to be consistent to the story and characters to whatever they are doing, but yeah I think sometimes movies can be – you see it so many times, it’s so heavy handed – that they come at it with sort of a political point of view as if it’s 1,000 percent correct,” Vaughn said. “You know I always think that, depending on the film, unless that’s your point of view, you are really just investigating those characters specifically and what’s going on.”

“The larger issue was, again, as a society the acceptance of the Patriot Act, the watching to keep us safe from our neighbors, the larger thing that was missed was, where does that end?” he said. “As a society, to a large degree, we have become too complacent with the role of privacy and what should be our expectations of it.”

Vaughn wrapped up his appearance with some encouraging words.

“I think as time goes on, and you guys probably feel this around campus as well, don’t you feel more people are coming along to some of these ideas?” he said. “They see the failure of people overstating stuff.”

He thanked the students for their activism as well.

“It’s a lot of fun to get a chance to come here with you guys today and talk about some of these issues,” he said. “I am glad you guys are so passionate and you are out there and getting the word out, so thank you so much for your time and commitment.”

After his talk, Vaughn shook hands and took photos with more than 100 students who lined up for a chance to meet him.