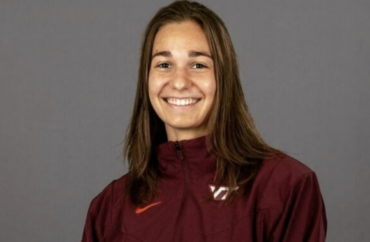 Reka Gyorgy, a former Olympian and Virginia Tech swimmer who finished in 17th place in the qualifiers for the 500-yard freestyle event at the NCAA Championships last week and thus did not make the cut to compete in the finals, is speaking out about the association’s transgender policy.

She wrote a letter to the NCAA and posted it to her private Instagram account Sunday, a memo that was quickly copied and disseminated widely.

It takes issue with the decision to allow transgender University of Pennsylvania swimmer Lia Thomas to compete alongside biological female swimmers at the NCAA championships.

At the top of her letter, Gyorgy asks that those who report on it release it in full. The College Fix has honored that request and reprinted her letter below in full:

My name is Reka Gyorgy from Hungary. I am a 2016 Rio Olympian, represented Virginia Tech for the past five years, a 2 time ACC Champion, 2 time All-American, and 3 time Honorable Mention All-American.

With all due respect, I would like to address something that is a problem in our sport right now and hurting athletes, especially female swimmers. Everyone has heard and known about transgender, Lia Thomas, and her case including all the issues and concerns that her situation brought into our sport. I’d like to point out that I respect and fully stand with Lia Thomas; I am convinced that she is no different than me or any other D1 swimmer who has woken up at 5am her entire life for morning practice. She has sacrificed family vacations and holidays for a competition. She has pushed herself to the limit to be the best athlete she could be. She is doing what she is passionate about and deserves that right. On the other hand, I would like to critique the NCAA rules that allow her to compete against us, who are biologically women.

Virginia Tech swimmer Reka Gyorgy has released a full statement on the NCAA allowing Lia Thomas to compete in the 500 freestyle. She was 17th in the event.

“Every event that transgender athletes participated in was one spot taken away from biological females throughout the meet” pic.twitter.com/Z0J9lUY3pN

I’m writing this letter right now in hopes that the NCAA will open their eyes and change these rules in the future. It doesn’t promote our sport in a good way and I think it is disrespectful against the biologically female swimmers who are competing in the NCAA.

This is my last college meet ever and I feel frustrated. It feels like that final spot was taken away from me because of the NCAA’s decision to let someone who is not a biological female compete. I know you could say I had the opportunity to swim faster and make the top 16, but this situation makes it a bit different and I can’t help but be angry or sad. It hurts me, my team and other women in the pool.

One spot was taken away from the girl who got 9th in the 500 free and didn’t make it back to the A final, preventing her from being an All-American. Every event that transgender athletes competed in was one spot taken away from biological females throughout the meet.

Lia Thomas wins the 500 free at the NCAA Championships with a program-record time of 4:33.24.#FightOnPenn 🔴🔵 pic.twitter.com/YrQVbpxZRY

The University of Virginia’s Emma Weyant finished in second at 4:34.99. Many observers crowned her the real first-place winner.

Some are also reportedly being told to stay quiet. National Review reports that one swim mom said her daughter and her teammates “are being quieted,” adding, “The coaches won’t talk with them about it. . . . They’re essentially saying smile, shut up, and step aside.”