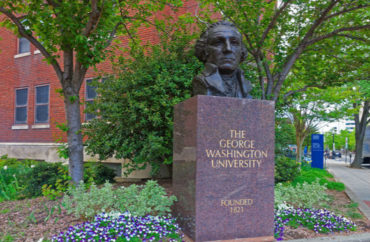 Committee will draft ‘overarching principles and guidelines’ for renaming

The George Washington University Board of Trustees recently created an official task force that focuses in part on renaming buildings named after potentially offensive historic figures. The initiative comes after several years of ad hoc student commissions to promote similar efforts on campus.

The “Task Force on Naming,” which The GW Hatchet reported has been in development since at least early November, is made up of 17 school community members, from trustees to faculty to students. It was launched by the university’s Board of Trustees late last month.

André Gonzales, one of the students on the task force, said in an email interview with The College Fix that the task force’s goals “will develop the overarching principles and guidelines that the university will consult when the campus community requests a building, space, or symbol to be renamed.”

“The university has said such situations will be handled on a case-by-case basis,” Gonzales said. He also chairs another university task force, the Student Association’s “Colonial Moniker”

“Since the Task Force on Naming has yet to meet, I cannot speak to specifics about these principles. I would refer you to GW’s ongoing strategic plan, and our university’s core values,” he wrote.

Board of Trustees Chair Grace Speights wrote in a campus-wide email last month that the task force “will not consider specific requests for name changes. Its charge is limited to recommending the principles and procedures for addressing name change requests.” Echoing Gonzales’ description, Speights also wrote that the task force will draft “principles that will guide the board and university administration in determining the names of new building, facilities, and other public spaces.”

Speights didn’t respond to numerous requests for comment by The Fix. Of the multiple individuals on the task force identified and contacted by The Fix, Gonzales was the only one to respond.

Task force will not consider changing the name of the university

The Fix asked Gonzalez if the task force is considering a name-change of George Washington University itself. The school is named for the first president of the United States, a plantation farmer who owned a considerable number of human slaves during his lifetime.

Gonzales firmly denied any attempts by the task force to influence a name change of the university. “The Task Force on Naming is not considering changing the name of the university itself. When we talk about this committee, this is a question that is often asked. I have never called for changing the name of the entire university and to my knowledge, neither has any other student leader who has worked on this issue,” he said.

Picks up where prior efforts left off

This isn’t the first time a committee designed to explore renaming campus buildings has been launched at the university. In September of 2017, a group of ten students formed an informal task force to do just that, promising to tackle school structures named for individuals with “problematic” pasts. They focused their attention on the Marvin Center, named after former university president Cloyd Heck Marvin, who was a proponent of segregation.

Eight months later, however, the renaming task force had totally stalled. The group’s membership fell from ten students to just two, and failed to suggest any name changes to university officials. The task force declined to say whether school President Thomas LeBlanc had been receptive to their plans.

Sixth months after the committee reached a standstill, the student government Vice President for Diversity and Inclusion Shelby Singleton submitted a proposal to school President Thomas LeBlanc about a new task force on naming that would include school officials, faculty, and students. The group was initially meant to “create a set of guidelines to evaluate the names and…eventually produce recommendations for building name changes.”

In his email interview, Gonzales told The College Fix last week that, to his knowledge, “the only building that has been renamed during my time at GW has been Ivory Tower (now named Shenkman Hall).”

“However, a number of campus spaces and orgs have been renamed to drop the use of ‘Colonial’ in their titles,” he added.

The Colonial controversy has been ongoing on the campus. In May of 2018 a student petition circulated demanding the moniker be dropped. In April of this year a majority of student voters passed a referendum calling for the brand’s abolishment. By the start of this semester the school was quietly stripping the “Colonial” designation from numerous campus buildings.

The task force’s debut came at a time when student interest in renaming efforts was still high. Early last month, as the task force was nearing its debut, The Hatchet reported that, in the spring of this year, the student government had presented school leaders with a number of guidelines for naming and renaming buildings. According to The Hatchet, any building is that is named after an individual that participated in behavior “inconsistent” with the school’s current standards should be renamed.

Gonzales said student reactions to the renaming committee have been sparse, but pointed to the timing of the university’s announcement as an explanation—students were on break and then busy with finals, he wrote.

“But,” he clarified, “with the outcomes of recent legislation, executive orders, and referendums through the GW Student Association, I would say we are honoring students’ calls for this type of Committee and these conversations to take place. I’m looking forward to working with committee members and the greater campus community moving forward.”