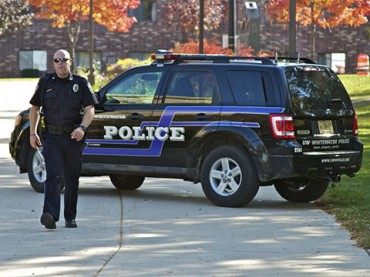 Campus security and local law enforcement officers aren’t eager to issue citations to students for alcohol violations, refer such students to the campus health center or even tell their parents, according to a survey of directors of campus police and security at 343 colleges in the U.S.

The results from “College Law Enforcement and Security Department Responses to Alcohol-Related Incidents” will be published in the August issue of Alcoholism: Clinical & Experimental Research.

It’s the first study to monitor enforcement actions for alcohol laws in “alarge, nationally representative sample of colleges,” Toben Nelson, University of Minnesota associate professor of public health and co-author of the study, said in a release on the science news service EurekAlert. College students are more likely to binge drink in a 30-day period than non-college peers their age because of the “high density” of bars and liquor stores, frat houses serving to underage students, cheap drink specials and “a student social life that emphasizes drinking,” Nelson said.

The study found “it was rare for campus security or law enforcement officials to issue citations for students involved in an alcohol-related violation or incident,” Ken Winters, a professor of psychiatry at the University of Minnesota Medical School and a co-author of the study, told USA Today College.

Students were more often “referred for discipline or sanctions to other officials within the university, rather than in formal courts,” Nelson told HealthTalk.

“Students were generally not referred to the campus health center for alcohol screening or intervention, and contact with parents by campus security or law enforcement typically did not occur,” Nelson added.

Principal investigator Tracy Toomey at the University of Minnesota told USA Today that few colleges “have a system in place that integrates strategies across departments,” which is why campus security “should be trained on what steps should be followed, including where to refer students following an incident.”

Enforcement often depends on the severity of the incident, University of Minnesota co-investigator Darin Erickson said on EurekAlert. “Lack of action on less serious violations was more common on campuses perceived to have a major problem with student drinking,” he said.

Erickson told USA Today that large public colleges in small towns show a higher percentage of enforcement against alcohol offenses, possibly because “these schools typify the ‘party school’ and may be more likely to have campus police as opposed to security.”

Such schools “also have historically had to balance the desires of the community with the realities of a large campus,” Erickson added.

Some students say drinking is just part of college, and that’s not changing.

“We could monitor underage drinking better, and that way college students would not be fearful of reporting drinking accidents like alcohol poisoning,” Ranbir Gill, a junior majoring in liberal studies at the University of Pittsburgh and resident adviser who often deals with drunk students, told The College Fix in a phone interview.

“But no matter what, drinking is going to be a part of the college culture due to its abundance in the Greek life and college setting in general,” Gill said.

Alexander Lichtenberg, a senior majoring in psychology at the University of Maryland-College Park, thinks that school penalties deter students from engaging in underage drinking.

“Before I was 21, my friends were definitely more cognizant” of the university-sanctioned “consequences of breaking alcohol-related rules,” Lichtenberg told USA Today. “This included having alcohol in their rooms and drinking anywhere on campus.”

“Students who are having difficulty with alcohol are likely to come to the attention of campus police or for other disciplinary reasons before they are identified by the health center,” Nelson said on EurekAlert.

If schools can “better integrate their systems,” Nelson said, then “students who are at-risk can get the services they need, such as evidence-based counseling, brief intervention, and treatment.”