Christmas celebrates the birth of Jesus Christ, not his death, which happens in the spring. When it comes to dead litigation, it’s apparently the opposite.

The 4th U.S. Circuit Court of Appeals has resurrected a lawsuit against the University of Mary Washington for not meddling enough in its students’ lives.

Here’s some background: A location-based social media app called Yik Yak used to exist. It let users post things anonymously in a given geographic area, such as around colleges.

Unsurprisingly, a lot of people posted boorish and offensive things. Even less surprisingly, people with fascist tendencies demanded their universities identify and punish those people.

A feminist group at UMW took this to the next level by filing a lawsuit last year alleging the public university failed to protect them from a “sexually hostile environment.”

Also named as a defendant was the university’s former president Richard Hurley, who allegedly retaliated against the plaintiffs … by publicly defending the school against the students’ claims. I’m not kidding.

The lawsuit’s other legal reasoning was not particularly convincing. The plaintiffs said UMW should have shut down Yik Yak by banning the app from the campus network. This would not have stopped anyone with a data signal from using the app. Which is basically everyone.

A federal judge knocked down the lawsuit a year ago, saying that implementing the plaintiffs’ demands “may have exposed the university to liability under the First Amendment.”

It wasn’t even clear the university had control over the people posting on Yik Yak, since they could have been members of the broader Fredericksburg community in the vicinity of the university, or just visitors passing through, or students communicating off-campus.

Assumed but never demonstrated in the lawsuit: whether the speech at issue in Yik Yak was unprotected under the First Amendment. You’d think this would be the first thing the 4th Circuit would nail down. 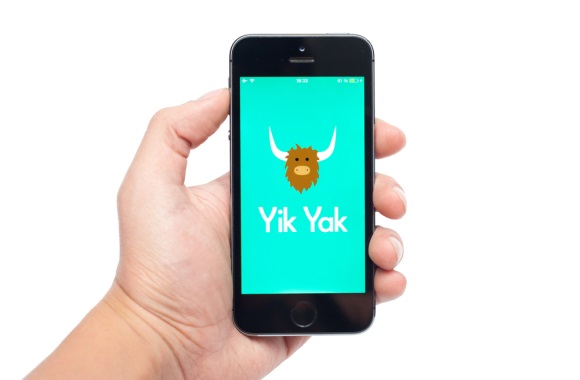 As analyzed by the Foundation for Individual Rights in Education, the Richmond, Virginia-based appeals court completely ignored the legal status of the very speech at issue.

That was the focus of a friend-of-the-court brief filed by FIRE and other free-speech groups earlier this year. They argued that not only were the “yaks” cited by the plaintiffs “crude and offensive” at worst, and nowhere near unprotected “true threats,” but that their cited case law only applied to K-12 contexts.

The university did everything short of violating the First Amendment rights of other students to assuage the concerns of the plaintiffs, the brief argued: It was anything but “deliberately indifferent,” the threshold for private damages under Title IX.

The 2-1 majority took 57 pages to showcase its willful ignorance of First Amendment law, not only describing the yaks as “harassing and threatening” but explicitly rejecting a narrow remedy for the alleged problem:

[T]he Complaint shows that UMW had substantial control over the context of the harassment because it actually transpired on campus. Specifically, due to Yik Yak’s location-based feature, the harassing and threatening messages originated on or within the immediate vicinity of the UMW campus. …

What message does this ruling communicate to colleges in Maryland, Virginia, West Virginia, North Carolina and South Carolina, the 4th Circuit’s jurisdiction?

As explained by FIRE’s Samantha Harris, vice president for procedural advocacy, they are being told:

Title IX may sometimes require colleges to censor or block all students’ access to certain internet sites or services based solely on anonymous statements made in an online forum that the university does not control, by people who may not be on campus, or even affiliated with the university at all.

It is shocking that the majority opinion seems oblivious to its “far-reaching implications for universities’ obligation to monitor and address the off-campus, online speech of its students,” Harris says. They completely ignored “the enormous elephant in the room; if the speech was constitutionally protected, and was not harassment, then the question of substantial control is irrelevant.”

The third judge on the panel, G. Steven Agee, echoed this view in a 32-page dissent that eviscerates the majority for their misunderstanding of the Supreme Court’s controlling Davis standard on harassment in an educational context.

Agee marveled at his colleagues’ “unprecedented view of a Title IX Davis claim,” which “exposes a funding recipient to liability even when the allegations show that neither the student victims nor their school knows who the harassers are, much less has control over them, and the school has no control over the environment in which the harassment occurred.”

He accused judges Robert King and Pamela Harris of “pure speculation to reach a desired result”: that the yaks seen by the plaintiffs came from fellow students, even though the yaks can be posted by anyone within a 1.5-mile radius of the viewer (the plaintiffs).

Agee notes that UMW, a liberal arts school, has a “roughly 0.3-square-mile territory in every direction” from the center of campus, meaning the yaks could have come from “residential neighborhoods, apartment complexes, and numerous shopping and dining establishments,” as well as the hospital, high school, regional library … you get the point.

“These deficits in the Complaint’s factual allegations are fatal” to the plaintiffs’ deliberate indifference claim, Agee writes: “Merely labeling something as student harassment does not make it so.”

FIRE’s Harris identifies one redeeming quality of the majority opinion: It wasn’t dumb enough to agree with the plaintiffs that university officials aren’t allowed to defend the institution against high-profile accusations in an equally public way.

She agrees with Agee’s mic drop against his colleagues, that they deserve a rebuke from the full 4th Circuit if not the Supreme Court:

Make no mistake, the majority’s novel and unsupported decision will have a profound effect, particularly on institutions of higher education, until the Supreme Court reaffirms that Davis means what it says. Institutions, like the University, will be compelled to venture into an ethereal world of non-university forums at great cost and significant liability, in order to avoid the Catch-22 Title IX liability the majority now proclaims. The University should not hesitate to seek further review.

MORE: Feminists sue UMW for not protecting them from ‘hostile’ comments