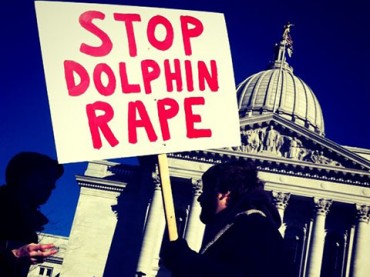 Student protest and even vandalism failed to sway a New York art college that twice displayed an artwork alleged to “trigger” victims of sexual assault – but the school’s mixed response may encourage future protests against controversial art.

“The walls of the photography building are a place for the community to display work without filter or administrative intervention,” Stephen Frailey, School of Visual Arts photography department chair, told The College Fix by email. “No prior judgment is made regarding works merit [sic] or aesthetic status.”

“Dolphin Rape Cave” is a photograph displaying three men dressed in dolphin costumes holding down two lingerie-clad women. Assistant Studio Manager Nathaniel Shannon, who created the artwork, told the Student Press Law Center the scenario referred to claims on the Internet that dolphins sexually assault each other and even people. The artwork was displayed Sept. 2-12 on the sixth floor of the photo building, which includes offices, classrooms and studio space but is not open to the public.

After seeing the photo, student Sarah Thomasson created a Change.org petition, “Rape Trigger Warning,” which fell 48 signatures short of reaching its 500-supporter goal. Thomasson did not respond to interview requests from The College Fix.

A former bartender who witnessed male customers harassing his female co-workers, Shannon told the Student Press Law Center the dolphins were “a metaphor for misogynistic date rape and the dangers, exploring the idea that there may be beasts lying beneath seemingly friendly faces.”

Shannon’s LinkedIn profile says his artwork “deals with juxtapositions and underlying themes of fantastical improbability, always waiting for that spark of vulnerability in those I photograph.” He is also a freelance photographer for the New York Post.

The notion that dolphins rape each other and attack humans goes back to at least a 2009 Slate article, and it has since become a cultural meme.

“This piece pokes fun at one of the most traumatic experiences in a person’s life. There is a fine line between provocative art and being plainly distasteful. This is the most profound example of crossing that line,” the petition reads.

“This is supposed to be an art installation. RAPE IS NOT ART, RAPE IS A CRIME,” the petition continues, calling for the photo’s removal “as soon as possible as to ensure safety in this building.”

Another School of Visual Arts student, Kylene Kasch, took the same “safety” approach in a Tumblr post, arguing that Shannon’s failure to include an “artist statement” made the photo “potentially triggering for many of the students interacting with his work.”

The school released a statement to the media saying that it supports the right of the photo’s critics “to express their views,” but “because freedom of expression is central to our educational mission, and indeed the health of a democratic society, the College does not engage in censorship.”

The school held a student forum Sept. 11, the day before the photo was scheduled to be taken down, “to put the work into context and discuss the surrounding issues,” the statement said. The dialogue within the school “about how to display potentially offensive work is ongoing.”

That timing for the student forum “gave the impression of a knee-jerk scramble” in response to the backlash, Kasch wrote on Tumblr, suggesting the school could have put “a screen” over the photo. Student “safety and well-being … should take priority above artistic ‘creative license,’” she said.

At least one student didn’t wait for the administration to have a change of heart, tearing down the photo during its second week of display, according to the Student Press Law Center. A new print was quickly posted.

“As the department chair, I take full responsibility for the decision to allow the work to remain, and to replace it after it had been vandalized—to preserve this fragile freedom. The School of Visual Arts as an institution has ratified this decision. We do not censor,” Frailey told The College Fix.

Frailey himself responded to the Change.org petition, saying “the integrity of the department has been questioned” and defending it from claims that it’s “trivializing” rape by allowing the controversial photograph to stay up.

“There are many constituencies in a plural culture such as an art school, and based on individual ethics and sensitivities, material will and does offend,” Frailey wrote. Some Christian students, for example, “are deeply uncomfortable with much of the work on the gallery walls,” he said.

But tolerating “the most vile and abject opinions …is part of our responsibility to safeguard our own freedom to express our opinions,” Frailey said.