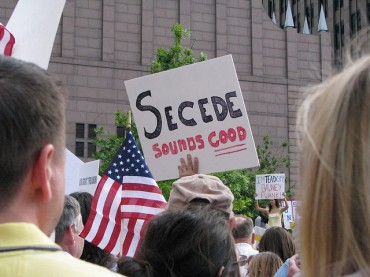 Several professors across the nation have dismissed efforts by more than 500,000 Americans to secede from the U.S., labeling petitioners as emotional, even “idiots,” and likening the movement to a fairy tale. One professor even implied the effort is racist.

Dr. Brian Ellison, chairman of Appalachian State University’s Department of Government and Justice Studies, told The College Fix in an email that “these people are idiots. Mostly they have no understanding of how government works and they’re caught up in a make believe world created by Fox News.”

He is not alone. Several other professors who have opined about the effort disregarded the petitions as simply emotional reactions to President Barack Obama’s re-election, according to various news reports.

One scholar has even gone so far as to imply those who signed the petitions to secede from America as a result of last week’s presidential election are racist, in that they’re unhappy with a black President.

Dr. Art English, science professor at the University of Arkansas at Little Rock, told reporter Dustin Barnes (of Fox affiliate KLRT) that “it’s hard to tell if it’s strictly Obama’s policies or his race that led to this bold petition.”

“It’s not really legal,” Ken Collier, a political science professor at Stephen F. Austen State University, told ABC news affiliate KTRE. “We joined the Union under the terms everybody else did.”

Collier said he believes people are just upset over the election, and they’ll simmer down.

“I think you’ll see this die down pretty quickly,” the Texas professor was quoted as saying. “People want to secede, people want to move to Canada, or whatever, but in the end they step back, reflect and understand how much they love their country and how much they would give away if they moved away.”

McMurray University history professor Don Frazier cited similar reasoning for the petitions, focusing instead on what would happen if secession were granted in an interview published by the Abilene Reporter-News.

Frazier referred to the idea of an easy secession for Texas as an “old-wives tale.”

It remains to be seen if the effort will die down as people continue to access the White House’s site We the People, which hosts the petitions.

A petition calling for the secession of Texas has garnered nearly 100,000 signatures in just over a week. In total, more than 40 states have filed petitions to secede from the United States, many requesting that the Obama Administration peacefully grant a state the right to withdraw from the United States and create a new government. The petitions declare:

“As the founding fathers of the United States of America made clear in the Declaration of Independence in 1776:

“When in the Course of human events, it becomes necessary for one people to dissolve the political bands which have connected them with another, and to assume among the powers of the earth, the separate and equal station to which the Laws of Nature and of Nature’s God entitle them, a decent respect to the opinions of mankind requires that they should declare the causes which impel them to the separation.”

“…Governments are instituted among Men, deriving their just powers from the consent of the governed, that whenever any Form of Government becomes destructive of these ends, it is the Right of the People to alter or abolish it, and institute new Government…”

It is unclear how many of the signatures represent registered voters, as the White House site only requires that participants be 13-years-old or older, and register using their name and email address. Also, there is no polling data to determine how many Americans would support state secession.

However, there are petitions on the White House page that also call for a peaceful secession (1, 232 signatures); for the U.S. to “allow the States that have asked to secede to do so peacefully” (1, 826 signatures); and even one to “deport everyone that signed a petition to withdraw their state from the United States of America” (13,399).

To date, states that either have not filed or have not met the White House’s threshold to be listed on “We the People” include Washington, West Virginia, Maryland, Delaware, New Hampshire, Massachusetts, Connecticut and Hawaii.

Petitions with more than 25,000 signatures can expect to receive a response, as the White House is committed under its terms of participation to do so. Petitions from states that have crossed that threshold so far are Texas, Louisiana, Florida, Georgia, Alabama, Tennessee and North Carolina.

The petitions from Oregon, Alaska and Virginia (each with less than 13,000 signatures) request that these states be allowed to vote as a state whether or not to secede. There are also several states with more than one petition for secession:

Although Texas has nearly 100,000 petitioners , Texas Governor Rick Perry’s spokewoman, Catherine Frazier, told reporters that while Perry “shares the frustrations many Americans have with our federal government” he “believes in the greatness of our Union and nothing should be done to change it.”

Meanwhile, a petition filed with the White House for the city of Austin to withdraw from Texas and remain a part of the United States is gaining momentum, as 3,500 signatures have been collected so far.