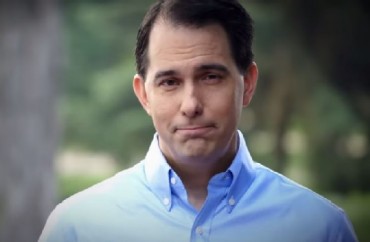 But in July, Walker announced he would soon be helming the Young America’s Foundation, a group started in 1977 to promote conservative ideals among young people.

Walker is set to take over in early 2021. In an exclusive interview with The College Fix, he joked that he already tried to be president-elect once, so this time he is “going to take my time to milk that title as long as possible.”

In agreeing to a four-year contract, Walker confirmed that he would not be a candidate for any office in either 2022 or 2024.

“It’s not fair to them if I was in there and people were speculating about me running,” he said.

Walker told The Fix that, over the years, he has been a big fan of YAF, particularly because of the group’s connection to former President Ronald Reagan. The group oversees the Reagan Ranch in California, where it frequently hosts events and speakers.

Walker, who was 12-years-old when Reagan was first elected, credits him more than anyone other than his parents with shaping his worldview.

“I’m a conservative, I’m a Republican, and most importantly, I’m an optimist, mostly because of Ronald Reagan,” he said. Walker’s wife, Tonette, currently serves on the Reagan Ranch’s board of governors.

Walker said YAF President Ron Robinson approached him late last year and asked if the group would be something Walker would be interested in.

After taking some time to think about it, Walker sat down with the YAF board earlier this year. He said it was a great organization, but warned he didn’t just want to be a “caretaker.”

He said he told the board he was their guy if they wanted “someone who can elevate this at a time when I think we need it more than ever, when free speech is under constant threat, particularly on college campuses.”

He noted it is now a time when “nearly 60 percent of adults under 30 think that socialism is acceptable, and when, sadly, less than one-quarter of that age group are exceptionally proud to be Americans.”

“That’s not an indictment of YAF – YAF has been great – but we have to multiply it a thousand times over and reach more students and more campuses and earlier. Not just in college and high school, but teens and pre-teens, to find more ways to expose people to the truth,” he said he told the board.

Walker said he’s not taking over until 2021 because Robinson has a succession plan that kicks in after the 2020 elections. Robinson and the board offered to move it up for Walker, but he demurred, saying he needed to wind down a number of projects to which he is committed for the next year.

Currently, Walker is working on a balanced budget constitutional amendment, on the counter to former Attorney General Eric Holder’s attempts to scrap Republican reapportionment plans, and helping out the National Taxpayers’ Union.

Walker also announced last week he would be serving on the board of Students for Life, which he called a “natural” fit given his early involvement in pro-life causes. At one point in his own college career, Walker served as president of the Marquette University Students for Life.

“It’s another one of those things that helps us get back to our roots, full circle,” he said.

“As much as I’m a conservative, what I’d love more than anything is not necessarily having more conservative professors or conservative students,” he said. “What I want are more efforts for people to objectively hear what’s going on – to have a chance for conservatives who come on campus to be able to be heard, whether they’re speakers or professors or students, and have an equal opportunity without fear of being shut down.”

“The First Amendment to the Constitution guarantees free speech,” Walker added, “but, if anything, it should not only be guaranteed, it should be embraced on our college and university campuses across the nation.”

Walker said another priority of his, both at the high school and university level, would be to promote more objective teaching of American history, global history, economics, and simple financial literacy: “If you just give people the facts, if you don’t put your spin on it, the facts will overwhelmingly lead people to be more aligned with our point of view.”

“Any objective review of that statement would say that there has been no generation in the history of the world that has had greater access to prosperity, freedom, and freedom of information than the current generation,” Walker said. He added that because of progressive professors and liberal politicians, “this generation just doesn’t believe what the facts show to be true.”

Walker is perhaps best known nationally for his fight against public-sector labor unions, which attempted to recall him in 2012 after he signed a law weakening their ability to collectively bargain. The former governor sees parallels between that fight and the conservative work to be done on campuses.

He recalls seeing a newspaper photo of a car in Wisconsin with two bumper stickers – one sticker was emblazoned with the word “Coexist,” and the other said “Recall Walker.”

“Obviously, the driver of that car didn’t get the irony,” Walker said. He said the predominant idea on campuses now is that you are welcome to “coexist” as long as you are ideologically in line. “On the one hand, they think everyone should be open, with free thought and free speech, at the same time shutting down people they don’t agree with.”

“Liberals should be as concerned about the misuse of authority as conservatives are in this particular issue,” he said. “Any push back on free speech could ultimately lead to a push back on their views,” Walker added, saying YAF would fight for free speech rights for speakers on both the right and left.

Walker noted that schools of all sorts of ideological bents are now beginning to protect speech on campus, singling out Purdue, the University of Chicago, and Princeton as colleges that should be emulated. He said he is proud of the work he did with the University of Wisconsin, where he signed laws with “real teeth” protecting the right to speak on campus.

“You have to take it to the extent of expelling people if they’re not going to honor the rights of others to speak up,” he said.

But Walker reiterated his primary goal was to bring about fairness with simple facts. He noted a recent case where former Vice President Joe Biden conceded he had a good working relationship with two segregationist U.S. senators early in his legislative career. MSNBC anchor Kasie Hunt immediately assumed the segregationists were Republicans and said so on the air; in fact, Senators Herman Talmadge and James Eastland were both southern Democrats.

“Unfortunately, that’s the bias – they just assume all these bad and awful things,” Walker said. “If students are there to soak things up like a sponge and learn, if all they hear is one side, they’re just going to assume that unless they have great influences outside that.”

“Whether I run or don’t run again,” Walker said, “it’s just a natural to say we’re going to help open the eyes of the next generation.”

DISCLAIMER: In 2018, the author worked at the Wisconsin Department of Transportation for four months during Walker’s tenure as governor.