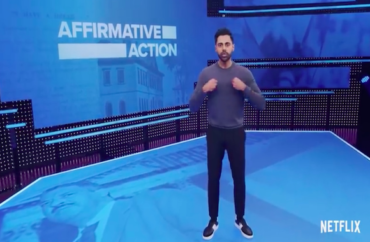 Netflix’s streaming service is best known for smash hits like “House of Cards” or “Stranger Things.” But an Asian-American educational advocacy group is condemning one of the company’s television shows for a “smear campaign” against it.

In Netflix’s “Patriot Act with Hasan Minhaj,” the titular host blasts accusations and lawsuits alleging racial discrimination against Asian-Americans in Harvard admissions, claiming that those lawsuits are being bankrolled by white conservatives who want to end affirmative action.

The Asian American Coalition for Education criticized both Minhaj and Netflix for “suppressing Asian-American communities’ fight for our children’s civil rights.” A press release from the group claims Minhaj and Netflix practice “blatant intimidation of civil rights activism in Asian American communities” and justify “widespread anti-Asian discrimination by our nation’s selective colleges.”

The release goes on to call Minhaj a hypocrite:

[W]hile given the platform to present an objective discussion of college admissions, Mr. Minhaj failed to examine the true root cause of the lack of racial diversity in America’s selective colleges—failing K-12 education in too many black and Hispanic communities…Instead, he launched one-sided, hyper-partisan attacks on the personal characters and immigrant backgrounds of AACE directors. This show reveals Mr. Minhaj’s true colors as a hypocritical political activist who engages in race-based identity politics, under the disguise of an “investigation journalist.”

In the segment, Minhaj also describes CalTech, a school with a student population that is 42.7 percent Asian-American, as an “Asian paradise” because of its emphasis on test scores.

MORE: Judge to decide if Harvard discriminates against Asian-American