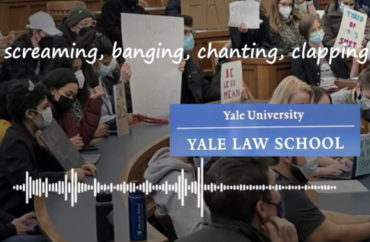 ‘What happened at Yale Law School was deeply disturbing’

There were many articles published regarding an incident in March at Yale Law School in which a bipartisan panel on civil liberties was disrupted by a rowdy group of protesters, including in The College Fix: “At Yale free speech event, protester threatens to beat up conservative, cops called.”

But as the dust settles and more details emerge, it’s clear what happened at one of the nation’s top law schools is a massive canary in the coalmine.

The March 10 protest targeted a Federalist Society event that featured two speakers, one from the left and a voice from the right; but panelist and Alliance Defending Freedom conservative attorney Kristen Waggoner allegedly put queer students “at risk of harm” by her presence and words, protesters argued.

A series of audio clips published by Alliance Defending Freedom captures the nation’s future top lawyers shrieking and screaming at the top of their lungs to disrupt the event, as well as banging on desks and chanting and clapping as they acted like toddlers throwing a tantrum.

Making this situation worse was the fact that this is “where the attorneys of tomorrow are being trained to think critically, using logic, reason, facts, and evidence to advocate effectively in court,” ADF noted.

“What happened at Yale Law School was deeply disturbing. A mob overran a campus event to shut down a civil conversation.”

The Washington Free Beacon reports that police were called to help keep the peace, that as the panel concluded, police officers arrived to escort Waggoner out of the building.

The Yale Law School professor who served as the panel’s moderator and who told the student protesters to “grow up” — to no avail — wrote a letter calling for the students involved to be punished for violating the Ivy League institution’s free expression policy. Professor Kate Stith wrote in part:

FACTS: The hallway disruption was far more than excessively noisy. [Audio clips reveal] … disruption and interference even while the protesters were in Room 127. The audiotape further reveals the shocking and extraordinary disruption of the event after the protesters moved (twice) to the School’s main hallway—yelling, stomping, powerful chanting, and wall-banging. Students and faculty have also reported serious disruption of a faculty meeting and of two classes that were being conducted in other classrooms off the main hallway. Presumably there are audio/video tapes associated with these other classroom events. These recordings would also reveal the extent of interference.

LAW: It is critical to understand that Yale’s Free Expression policy does not only prohibit disruption that successfully shuts down an event or class. Rather, Yale’s policy prohibits “disrupting” an event, including “interfere[ing] with speakers’ ability to be heard and of community members to listen.” …

As it happens, events on March 10 were shut down by the remarkably loud and multisource hallway noise. For instance, whoever was running the faculty meeting decided to shut down its in-person portion and proceed solely on Zoom. Students in the class in Room 128 have said the instructor urged them to “yell” in order to be heard. The instructor in Room 121 stopped the class at one point explicitly because the noise so interfered with the teaching function. And we in Room 127 ceased even trying to talk or listen on multiple occasions. …

As a former prosecutor, I know well that not every violation has to be an occasion for
sanctions. In my judgment we should use this moment as an opportunity to educate our students about the core importance of free expression to our academic mission …

In her first statement on an incident, however, the dean of Yale Law School said the demonstrators did not violate the school’s free speech policy.

“Under the University’s free expression policy, student groups have every right to invite speakers to campus, and others have every right to voice opposition,” wrote Dean Heather Gerken. “Our commitment to free speech is clear and unwavering. Because unfettered debate is essential to our mission, we allow people to speak even when their speech is flatly inconsistent with our core values.”