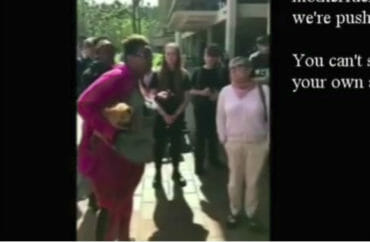 A controversial former professor at Evergreen State College who resigned last December is now speaking out about her perception of the racial uproar that engulfed the campus in a column for Medium headlined “I fought academia’s cult of civility and all I got was this lousy PTSD diagnosis.”

Amid the turmoil at the Olympia, Washington-based campus last year, media arts Professor Naima Lowe was recorded cussing out several white colleagues for being insufficiently supportive of leftist student activists and their demands, telling her peers “you are now the motherfuckers that we’re pushing against. You can’t see your way out of your own ass.”

Lowe also once posted on Facebook, “could some white women at Evergreen come and collect Heather Heying’s racist ass,” referring to a white peer who did not agree with Lowe’s narrative.

Lowe’s resignation was a condition of her $240,000 settlement to resolve her tort claim for discrimination and a hostile work environment. She had been on leave since the start of the academic year because of online attacks against her that escalated over the summer.

Lowe republished some of the online attacks she received in her Medium piece and they are indeed vile, disgusting and inexcusable. She also argues that the infamous video of her berating her white colleagues was selectively edited.

But in her column, published Oct. 15, she remains unrepentant of any role she played in fanning the flames of racial unrest at the school, continues to blame whiteness as an enemy, and writes that she’s in no mood for “civility.”

I believe that anger is useful and productive, and I’m no longer afraid to express mine with all its potency. Students and young people are often at the forefront of our movements and if we’re smart enough to pay attention, they can teach us important lessons about resisting the systems that demand our complacency and compliance. Civility hasn’t stopped the oncoming train of far right white nationalism in this country, and it doesn’t solve racism on college campuses. The concept is totally subjective, based on the values of those in power, and is consistently weaponized against women, people of color, young people, queers and others marginalized within public discourse. I lost my willingness to adhere to this arbitrary standard of behavior with people who should know better. …