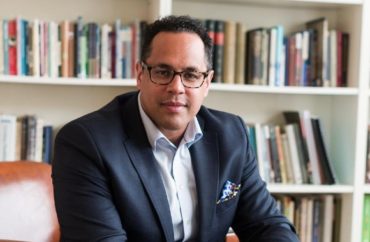 ‘From the outset … race was very much at issue’

A professor’s race heavily factored into his firing on the grounds of making racially and sexually insensitive comments, according to his attorney.

Wheaton College, known informally as the Harvard of evangelical colleges, publicly announced the dismissal of Chaplain Tim Blackmon earlier this month, more than a month after his firing.

The 50-year-old black immigrant from the Netherlands (above) has since vigorously disputed the allegations against him, telling the Chicago Tribune that “they are a complete misconstrual of the comments” he made.

President Philip Ryken justified the college’s firing of Blackmon by publicly accusing him of several violations Wheaton learned about last fall. He had “repeatedly used an ethnic slur” to refer to an Asian employee and suggested that a female staff member sit on his lap during a training session for sexual harassment, according to Wheaton’s statement.

Wheaton claimed that Blackmon “admitted to certain allegations, which is patently untrue,” his attorney Andrew Miltenberg told The College Fix in an email. The ex-chaplain “continues to refute” both the allegations and the context Wheaton applied to them.

“From the outset, Chapl[a]in Blackmon’s race was very much at issue,” contrary to Wheaton’s race-neutral portrayal of the allegations, Miltenberg said.

Citing Wheaton’s allegedly poor record with racial and ethnic diversity, “especially with the African American community,” the attorney said that Blackmon has been treated far worse than his white colleagues.

Pressure to conform with the prevailing views of the #MeToo movement and the controversies surrounding Title IX investigations resulted in an overreaction from the college, the attorney added.

Ultimately, Wheaton chose to oust Blackmon so that it could maintain the mantle of being an “ethnically diverse” college all the while “return[ing] to its roots – that being a primarily white educational institution,” Miltenberg alleged. Yet the fired employee and his attorney have not decided whether to take legal action yet.

When asked to specify some of the college’s allegations about Blackmon – including the exact racial slur – beyond its curt statement, Director of Marketing Joseph Moore stated: “Wheaton College is not providing further comment.”

That supposed slur, Blackmon told a blogger last week, stemmed from an “inside joke” about the song “Black and Yellow” by the rapper Wiz Khalifa and its relevance to working in a “predominantly white institution.”

Theological articles he shared were ‘ideologically problematic’ for accuser

Wheaton’s internal statement to its community, which Moore provided and which preceded Blackmon’s response, made clear that the college did not find that he engaged in “sexually immoral relationships or physical sexual misconduct.” Rather, its investigation “revealed conduct inconsistent with Wheaton’s policies and commitments.”

Moore did not not provide The Fix with the specific policies and commitments purportedly breached by Blackmon, however.

“To be clear, I was completely blind-sided by this Title IX investigation,” Blackmon said via his attorney in response to Wheaton’s statement.

“I recently learned this was the second time this individual filed a Title IX against me,” the first one occurring in 2017 after Blackmon had “shared five theological articles that the complainant [accuser] deemed ideologically problematic.” (He doesn’t give a more specific description of the accuser; Wheaton’s language suggests at least two women complained.)

Wheaton’s Title IX office didn’t investigate at the time, “as it was a clear misuse of the Title IX investigative process,” the chaplain continued. But in the most recent complaint, he said that “several of my comments have been taken completely out of their factual and, in some cases, religious context.”

He emphasized that no one accused him of “flirtation, inappropriate relationships, sexual misconduct or any sexual action towards anyone,” and neither the accuser nor “any witness, communicate[d] offense or discomfort.”

While it left out his race when justifying his firing, Wheaton emphasized Blackmon’s race when hiring him five years ago as the first nonwhite chaplain in its 155-year history.

Rodney Sisco, director of the Office of Multicultural Development, told The Wheaton Record: “I think change is change, and change is always difficult. Chaplain Blackmon is going to be seen differently.”

While Sisco was personally excited to have a “person of color leading the chaplain’s office,” he suspected that some community members would be “a little worried, asking, ‘Have we made some sort of strange mistake?’” He concluded by saying: “I think there will be some folks who push against the college.”

At the time, only 2.3 percent of the student body was comprised of African Americans. The most recent figures from 2017 put it at 3.03 percent––its white population is at 70.8 percent. (Ranking service College Factual says Wheaton has more “non-resident alien” students than African Americans.) This is at a college that was founded by evangelical abolitionists in 1860 and was a major stop along the Underground Railroad.

“Wheaton has failed in its attempt, if any were even made, to achieve truly measurable and transformative cultural diversity,” Miltenberg, who has represented hundreds of college students accused of sexual misconduct, told The Fix.

In a separate public statement, the attorney alleged that Wheaton administrators “are now publicly smearing and defaming my client in the media by using out of context statements and false accusations.”

Contrary to President Ryken’s claim, Blackmon “never asked his secretary to sit on his lap during a sexual harassment training,” and “never harassed anyone, sexually or racially,” according to Miltenberg. The college simply “weaponized the Title IX process to get rid of someone whose words and ideas didn’t always conform to their views.”

The lap allegation, Blackmon told The Roys Report blog last week, stemmed from his critical comments about “the mandatory (but rather patronizing) sexual harassment training video” he was required to watch when starting at Wheaton in September 2015.

He said he told the accuser: “Come on, it’s not like I don’t know what sexual harassment is. It’s not like I’m asking my secretary to sit on my lap and take the training for me.”

The context for another allegation, about his comments to a newly married female employee, was the fact that her “brand-new husband had been pulling all-nighters for grad-school,” Blackmon continued:

As a way of celebrating their newly wedded bliss I said, “Maybe you should surprise him and pay him a conjugal visit.” As to the conjugal-visit comment, I was genuinely trying to commiserate with her about the challenges of graduate school and newlyweds.

Regarding the incident involving “The Complete Idiot’s Guide to the Kama Sutra,” Miltenberg told The Fix that Blackmon “received the book from a former parishioner.”

Later, after she and her husband “laughed about it,” her husband “snuck into Tim’s office and hid it in his library where it sat for years. I guess it made its way to Chicago. I thought it was funny to put a book that silly in Tim’s office. And the idea I was a victim is stupid.”

According to Miltenberg, at some point Blackmon “told the complainant the story after he found the surprise gag gift in his [college’s] library and then gave her the book. He thought it was a funny story. That’s all there was to it.” (Blackmon told The Roys Report he shared the story with others, but admitted that it sounded bad when “taken out of its contexts without the prank.”)

Because this was “such a benign event,” the attorney continued, “we believe that Wheaton was looking for an excuse to sever its relationship with its first African American Chaplain” and return to being a predominantly white educational institution.

‘China-man’ was an ‘inside joke’

Regarding the “ethnic slur” he allegedly used repeatedly toward an Asian American employee, Blackmon provided the context to The Roys Report.

When he started working at Wheaton, Blackmon said one of his Korean ministry colleagues was “mistaken” for a professor. They “commiserated about the realities of beginning to work” at the predominantly white institution, comparing their situation to the Wiz Khalifa song “Black and Yellow”:

[A] black pastor from Holland and a Korean ministry associate. I said, “Maybe we should call you the China-man because people can’t even tell one Asian from another, one Chinese from a Korean.” More laughter ensued and for the next couple of weeks we commiserated about the ironies of working in a predominantly white institution, and we soon moved on from our inside joke and got to work.

“This,” said Blackmon, “is what they are considering the racial/ethnic slur.”

Miltenberg also suspects that “Wheaton may have overreacted out of fear of public pressure given the #MeToo movement and other Title IX related controversies as of late”:

Wheaton has repeatedly shifted the landscape in Chaplain Blackmon’s case, at times claiming it was Title IX issue, and other times, suggesting that the situation did not fall under Title IX.

This shifting has impeded Blackmon’s ability to appropriately respond to the allegations as well as “denying him the right to counsel,” Miltenberg said. The college has also ignored its own “employee conflict resolution procedures,” he claimed.

Its actions “have put Chaplain Blackmon’s future very much at risk,” Miltenberg said.