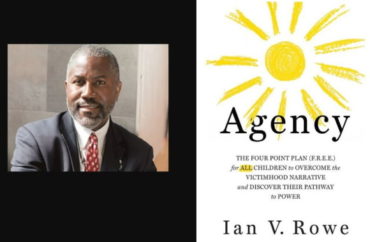 These four pillars of society make up the FREE framework touted by a conservative black scholar who argues while young people should not believe the “blame the system, blame the victim” lie — Americans should not discount the argument either, and work to ensure kids and students have the support and knowledge they need to succeed.

The argument comes from Ian Rowe, a senior fellow at the American Enterprise Institute and author of the recently published book “Agency: The Four Point Plan (F.R.E.E.) for ALL Children to Overcome the Victimhood Narrative and Discover Their Pathway to Power.”

“I put forth as those pillars of society which, if more young people were to embrace, they’d find the support that can help them be successful to overcome the institutional barriers that the critical race theorists constantly say are insurmountable,” Rowe said at a Heritage Foundation event in May, when the book was published.

Rowe, 57, called the “blame the system, blame the victim” mantra “half-truths that add up to a lie,” adding it’s a “debilitating message to young people.” He said that while young people should reject the victim mentality dogma, American should not “send a message that you have to do this on your own.”

That’s where “agency” comes in, he said, calling it the “force of your free will guided by moral discernment.”

“Agency is like a vector; velocity is not just speed, it’s speed and direction,” Rowe said, adding that family, churches and schools — ones that honor the values of equality of opportunity, individual dignity and common humanity — can help shape and promote young people to achieve and succeed in America.

Rowe’s online bio states he is cofounder of a new network of character-based International Baccalaureate high schools opening in the Bronx this year. The schools will reportedly cater mostly to black and Hispanic students from low-income families. The United Federation of Teachers union has sued in an effort to stop them from opening.

Rowe also serves as a senior visiting fellow at the Woodson Center and a writer for 1776 Unites, an initiative to “uphold our country’s authentic founding virtues and values and challenge those who assert America is forever defined by its past failures, such as slavery.”

Scholar Robert Pondiscio called Rowe “the bravest man in education reform” in a column published Thursday by the Fordham Institute:

Rowe says he wrote Agency “to help a rising generation realize that they have the power to shape their own destiny, even in the face of life’s inevitable obstacles.” But the book deserves and will likely find an even more eager audience among those of us in education who know in our bones that the victimhood narrative Rowe deftly dismantles is nihilistic, separatist, and simply untrue. Too often, he writes, “young people’s efforts to develop agency are thwarted, sometimes tragically, by the very people and institutions with the power and moral responsibility to propel their lives forward.” This is an emphatic rebuke to failure-fetishists in education, particularly those whose gospel preaches “a bleak vision of individual powerlessness against insurmountable and systemic forces.”

“My focus on the Constitution encourages interpretation of the Constitution to limit government, as intended by the founders, so government power does not compete with what Rowe calls ‘agency.’ Ian Rowe brings critical new perspective to our national discourse. Those who care about our nation should read ‘Agency’ for important insights on fixing our culture,” Parker wrote for the Epoch Times.