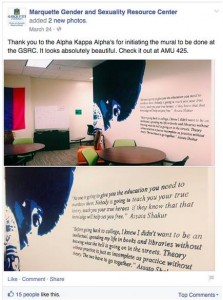 Some things are too much even for progressive Jesuits to tolerate. One of those things is a school-sponsored mural honoring a convicted cop killer.

Marquette University has canned the director of the Gender and Sexuality Resource Center, which hosted a mural honoring FBI most-wanted fugitive Assata Shakur from late March until Sunday night, after the mural’s presence became known nationally, according to Marquette Wire:

“Susannah Bartlow is no longer an employee with Marquette University,” said University Spokesman Brian Dorrington in an email. “We will work with the Center’s advisory board to search for a new director so that we can continue to grow the important programs in the Center.”

That also means Bartlow is out of her academic job – she was a women’s and gender studies professor who joined Marquette to lead the center upon its 2012 founding, the Wire says.

The murky phrasing around Bartlow’s status suggests she may have been convinced to leave the university before it tries to fire her, as it’s trying to do with the professor who exposed the mural, John McAdams.

The College Fix received word this afternoon that there were machinations against Bartlow – a Google Docs petition titled “Save Dr. Susannah Bartlow’s Job!” was making its way around the Internet. As of late Tuesday night, it had just under 200 signatures.