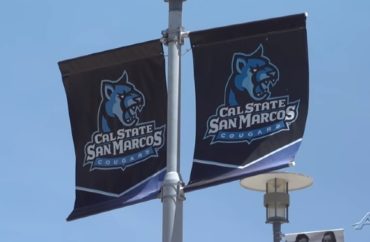 Six months after a federal judge ruled that California State University officials could be held personally liable for funding policies that disfavor pro-life students, the largest four-year university system in the country has agreed to revise policies across its 23 campuses.

CSU’s board of trustees and the student government at CSU-San Marcos entered into a settlement agreement with the campus chapter of Students for Life and its former president Nathan Apodaca.

CSU is paying $240,000 in legal fees to the students’ lawyers at the Alliance Defending Freedom and $3,000 in damages to the club. The student government is giving Apodaca a $300 refund of his mandatory student fees, which he paid into a funding system that favored pro-choice viewpoints and disfavored his own pro-life views.

“Ultimately, our Clients’ goal was to ensure the policies were changed and all students’ freedoms are protected,” Caleb Dalton, legal counsel for the alliance, told The College Fix in an email.

Judge James Lorenz’s ruling against “qualified immunity” for CSU Chancellor Timothy White and then-President Karen Haynes of CSUSM gave the plaintiffs “the leverage to make this happen,” Dalton said. “Thankfully, the end result is a change of policy not only on the San-Marcos campus, but a directive from the Chancellor that the entire Cal State system review and revise its policies.”

The university and CSU Office of the Chancellor did not answer a Fix request to explain what role the denial of qualified immunity played in their decision to settle and agree to specific terms.

In a joint statement, they emphasized that Lorenz did not find that the student government “intentionally engaged” in discrimination against Students for Life. Lorenz, however, specifically rejected the university’s argument that the pro-life students had to prove viewpoint discrimination.

The student government has such “broad discretion” over funding requests that it may create “an unacceptable risk of the suppression of ideas,” the judge wrote in the Aug. 13 order.

Student clubs including Students for Life, in contrast, can only apply for $500 per semester, and it can’t be used for honoraria or speaker fees. They must also submit itemized budgets.

(The student government rejected SFL’s funding request on this basis, though Judge Lorenz said this was proper because SFL submitted an “incomplete application.” SFL had sought to bring pro-life speaker Mike Adams of the University of North Carolina-Wilmington, who had previously debated an abortion doctor at UNCW.)

Lorenz ordered CSUSM to revise the $500 application process to require “specific and detailed standards guiding decision making” on funding requests. They can no longer judge “the content of the speech” seeking funding by asking questions about its “purpose” and the “student benefit” of clubs’ events.

The other funding mechanisms, including cosponsorship by the feminist and LGBTQ centers, have no written policies on cosponsorship. The two centers denied SFL’s cosponsorship requests after unconstitutional “back room deliberations” with the student government, Lorenz said, criticizing their failure to document the meeting so he could evaluate the rationale for denial.

The settlement agreement, dated Jan. 23 but not made public until Tuesday, says the parties entered mediation under U.S. Magistrate Judge Allison Goddard on Sept. 26 and agreed “in principle” on the resolution of the litigation.

The student government will adopt viewpoint-neutral standards for the allocation of mandatory student fees to any registered student organization “that involves viewpoint expression.” They must comply with the Supreme Court’s 2000 ruling in a similar case, known as Southworth.

The process must “not discriminate against any funding request based on the viewpoint to be expressed by the RSO or proposed event.” Funding applications that are “denied or reduced” must be accompanied by “the reasons” for the decision and a “right of prompt appeal” to an official or administrator.

All 23 campuses are getting a policy makeover as well. The agreement directs Chancellor White’s office to issue a “policy directive” across the system that imposes viewpoint-neutral criteria and procedures on student association funding requests for “student speech events.” It lays out five specific policies getting revisions.

The agreement includes a sample memorandum from White’s office, to be titled “Viewpoint Neutrality Policy Directive,” and the full text of the revised policies.

In a major setback for the feminist and LGBTQ centers, the agreement bars them from funding via mandatory student fees, retroactive to July 1. The student government’s Board of Directors and Campus Activity Board will also not use those fees “unless and until” the student government adopts viewpoint-neutral criteria.

In a statement on the settlement, the alliance emphasized that the two CSUSM centers received “57 times more than” the 100-plus recognized student organizations combined.

With this agreement, “the Cal State system will better align with the ‘inclusiveness’ and ‘individual and cultural diversity’ it touts within its community,” said Tyson Langhofer, director of the alliance’s Center for Academic Freedom.

“Cal-State San Marcos now understands that it can’t force student citizens to pay for advocacy of views the university decides are orthodox while effectively excluding funding for competing views,” he said.

Dalton thanked Judge Lorenz for rejecting “the university’s unfair, secretive, and discriminatory policy” and spurring the policy revisions so that “any student with a minority viewpoint” can receive the same treatment as those with popular viewpoints.

Chancellor White and President Haynes, who retired from CSUSM less than two months before Lorenz’s ruling, faced the prospect of personal liability for violating the pro-life students’ constitutional rights if the parties hadn’t agreed to settle.

Lorenz had rejected the defendants’ arguments that White and Haynes had a “reasonable belief” that forcing pro-life students to fund pro-choice speech, while denying them funding for their own speech, “was lawful.” The judge said “the development and state of the law” on compelled speech made clear to both officials that the funding mechanisms they oversaw were unconstitutional.

The university and CSU system did not acknowledge the finding against White and Haynes in their joint statement to The Fix, despite being asked specifically about it.

“We embrace the notion that universities must be a marketplace of ideas, and that this is essential to the educational process as students critically examine new ideas, learning from the perspectives of others,” the statement reads.

It construed Lorenz’s ruling as exonerating CSUSM and Associated Students, Inc. of intentional viewpoint discrimination, while finding that the funding process was “not adequately identified and documented”:

Therefore, the court ruled that the Associated Students’ commitment not to discriminate on the basis of an organization’s viewpoints had to be clearer and expressly set out in writing in its governing regulations and rules. …

Overall the process was a collaborate effort, by both sides, to strengthen viewpoint neutrality at this very diverse campus.