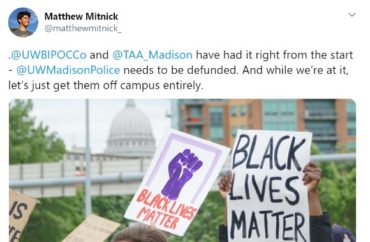 University of Wisconsin-Madison’s police department recently called out a student government leader for what they allege is duplicity in his statements on campus cops.

He also apparently told the campus police the same in two meetings. But then Mitnick tweeted on October 11:

.@UWBIPOCCo and @TAA_Madison have had it right from the start – @UWMadisonPolice needs to be defunded. And while we’re at it, let’s just get them off campus entirely.

.@UWBIPOCCo and @TAA_Madison have had it right from the start – @UWMadisonPolice needs to be defunded. And while we’re at it, let’s just get them off campus entirely.https://t.co/ZxgRoVvD4F

He tagged UW-Madison BIPOC Coalition, an activist group on campus that wants to defund campus police. TAA-Madison refers to a graduate employees union on campus.

In our first two meetings with ASM leaders, @matthewmitnick_ told us more than once that it was not ASM’s aim to defund or abolish UWPD. This certainly goes against Matthew’s own stated position. #mixedmessages.

In our first two meetings with ASM leaders, @matthewmitnick_ told us more than once that it was not ASM's aim to defund or abolish UWPD. This certainly goes against Matthew's own stated position. 🤔 #mixedmessages

“Mr. Mitnick’s statement on Twitter today goes against everything he has previously told UWPD in prior meetings,” police spokesperson Marc Lovicott told the student paper The Daily Cardinal. Lovicott criticized Mitnick for stating “multiple times previously that he and ASM have no plans to move forward with an effort to try and defund and/or abolish UWPD.”

Lovicott said his department has worked to combat “misinformation, accusations, and falsehoods” on social media.

“While we will continue to move forward with this approach, we’ve also come to a place in which we can no longer just sit back and continue to watch misinformation and false statements being shared about UWPD.”

Mitnick told the Daily Cardinal that his Twitter account is separate from his student government activities: “My Twitter account clearly notes in my bio that ‘Opinions are my own.’ My personal beliefs are always and should be open to criticisms — but not as an aspect of the dialogue between ASM and UWPD.”

The BIPOC Coalition, which represents black, indigenous, and people of color, criticized the police department for engaging Mitnick.

It said the department’s use of social media “smacks not only of bias and disrespect but represents a continued pattern of unethical behavior that puts students in danger.” It falsely claimed that because the campus police used Twitter scheduling app TweetDeck that the police had planned and scheduled its criticism.

Madison BIPOC continues to push for a defunding of the campus police.

In a joint editorial with the Daily Cardinal editorial board, the group demanded the school “Defund and subsequently abolish the University of Wisconsin Police Department” and “Create a coordinated infrastructure to respond to acts of structural oppression.”

It also wants to remove an Abraham Lincoln statue from campus.