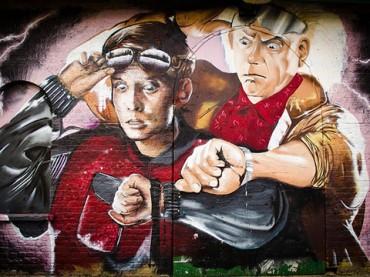 Much like plutonium in a DeLorean, the Charlie Hebdo massacre has apparently created an alternate universe wherein Canadian student media show more balls than their American counterparts (I would have expected hoverboards sooner).

The editorial board of The Manitoban, at the University of Manitoba, published the infamous “Charia Hebdo” cover from the French satirical journal and issued a clarion call to defend free speech against “radical Islam”:

Whether or not you agree with the content of the satirical cartoons in Charlie Hebdo (an equal opportunity offender that has also lambasted the Pope and numerous French politicians), so long as you believe in the rule of law and the principles of liberal democracy, you must stand in solidarity with the newspaper.

The student journalists take down the CBC’s top editor for comparing cartoons to dead bodies that no responsible outlet would show:

Equivocating between images of dead bodies and satirical cartoons is, of course, absurd. The refusal to publish the Charlie Hebdo material betrays the true motivation behind such mass self-censorship, which is the stark fear of violent retaliation. One hesitates to admonish these outlets with a platitude like “you’re letting the terrorists win,” but if the shoe fits, wear it.

The Manitoban could teach a thing or two to the confused young scribes at The Tufts Daily, who apparently disagree with their president that the answer to bad speech is more speech (sound familiar?):

Free speech is enshrined by law and is a central tenet of democracy. However, it is up to the individual to be aware of the broader meaning of what he or she is saying. Charlie Hebdo published racist cartoons. Is it technically acceptable to publish offensive and bigoted content, even through satire? Well, yes. But it’s far from heroic. Satire is at its best when it critiques those in positions of power, not when it maliciously attacks minority groups that are already subject to excessive criticism at every turn. To exercise free speech with reckless abandon by publishing openly Islamophobic material under the guise of “satire” is dangerous for society, and it ignores the sobering influence of media. …

If you can’t exercise free speech “with reckless abandon,” the First Amendment is pointless.

Maybe the Tufts editors will realize that when the administration comes knocking, reminding them of “their duty to apply that right evenly and fairly” when it comes to their own controversial commentary.

Read the Manitoban and Daily editorials.