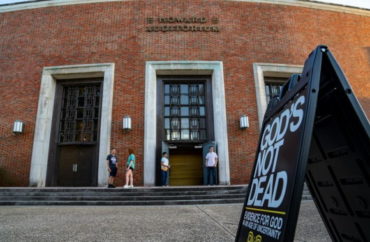 A physics professor whose class considering intelligent design thrust Ball State University into the national spotlight years ago is scheduled to return to his old campus, which had shut down his popular “Boundaries of Science” course.

Hedin is slated to appear at Ball State on Oct. 26 as part of a “God’s Not Dead” nationwide tour of college campuses.

“I see this situation as a testimony to how God has worked things for good, even when it may have seemed like a loss at the time,” Hedin told The College Fix in an email Thursday.

The tour also includes Rice Broocks, author of “God’s Not Dead,” the book that spawned the popular 2014 movie of the same name.

The “God’s Not Dead” campus stops are about five years old. Hedin and Broocks have given presentations together since fall 2021 and have visited nearly 20 universities so far, with many more in the offing.

Roughly 200 to 600 people come to each event, usually a mix of community members, staff, faculty, and mostly students, Hedin said, adding he mainly speaks about “how scientific evidence on origins (of the universe, life, morality) is best aligned with God as creator.”

“At these events, I am free to speak and make the connection directly between scientific evidence and the Bible, something I could not do in my BSU Boundaries of Science class,” Hedin said via email. “It’s a testimony to how God has worked for good the opposition that came against me in 2013 at BSU from atheists who wanted to shut down any discussion of the implications from science that could point outside of their materialistic worldview.”

“They maintained that science deals only with materialism, which is fine, but the implications of the evidence often point beyond this universe to a transcendent source or cause of this universe and life and unique human characteristics,” Hedin said.

Nearly 10 years ago, Ball State University in Indiana was thrust into the national spotlight after the nonprofit Freedom From Religion Foundation accused the school’s popular “Boundaries of Science” class of proselytizing students to advance Christianity.

In August 2013, Ball State’s then-President Jo Ann Gora declared the theory of intelligent design a religious belief, effectively banning educators from delving into the notion that an intelligence of some sort helped form the universe and life on Earth.

Although Hedin gained tenure at Ball State, he eventually left the campus to teach at Biola University in Southern California. He left fulltime teaching in 2021, and currently teaches physics part time at Indiana Wesleyan University. 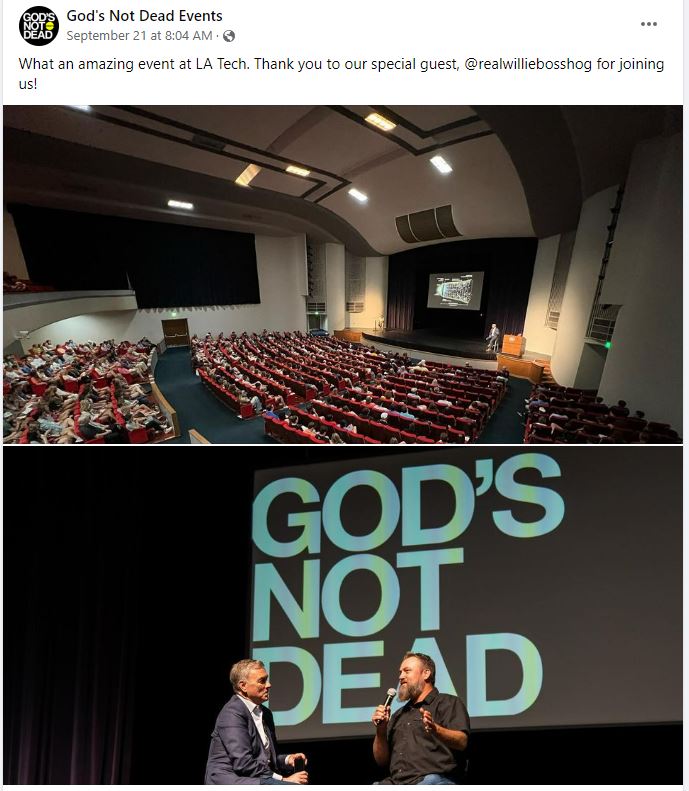 As for the “God’s Not Dead” tour, Hedin said it attracts a wide range, from Christians to atheists. There’s little protest aside from a few posters being torn down, he said.

“We’ll often get questions from atheist students, and we’re glad to interact with them,” he said. “The dialogue has always been very civil and respectful. We’re not trying to vilify anyone, but are interested in honestly engaging with students and giving them an honest presentation of the evidence to allow them to follow it as they will.”

This fall semester, the duo kicked off their tour at Alabama State on Sept. 12, then headed to Louisiana Tech University on September 20, which included a visit from “Duck Dynasty” star Willie Robertson, who also had a cameo in the “God’s Not Dead” movie.

“We present evidence that shows that there is a ‘mind behind the universe,’ a brute fact cause that is something other than physical matter, energy, or laws of nature,” Hedin told The Fix. “All of these came into existence with our universe, so they couldn’t be the cause of our universe.”

MORE: Physics professor: ‘Chance of life originating on its own by natural processes is zero’