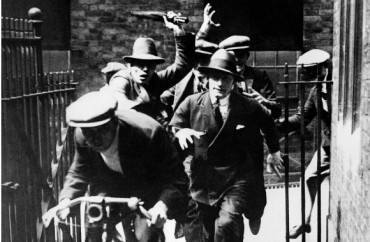 Catholic intellectual tradition can be applied to anything

A Catholic university’s three-year fight against the National Labor Relations Board has spooked some of its faculty, who believe a footnote in a school filing is a direct threat to their jobs.

Duquesne University in Pittsburgh, which is affiliated with the Spiritan order, is trying to exempt itself from an NLRB decision last year that said a religious college could not unilaterally stop its adjunct faculty from unionizing.

Though the school initially agreed to the union election and NLRB’s authority in May 2012, less than three weeks later Duquesne reversed course and asked the agency to withdraw its jurisdiction over the school, pointing to its religious mission, The New York Times reported then.

When the NLRB’s Pittsburgh office ruled against Duquesne in June, citing last December’s ruling against Pacific Lutheran University (PLU), the school president blasted the “secular government agency” for “determining whether we are religious enough by their own standards,” as The College Fix noted.

The dispute boils down to whether the part-time adjunct faculty seeking to unionize have religious duties inherent in their positions.

Duquesne’s mission statement says it “serves God by serving students through commitment to excellence in liberal and professional education; profound concern for moral and spiritual values; maintaining an ecumenical atmosphere open to diversity; service to the Church, the community, the nation and the world; and attentiveness to global concerns.”

Duquesne’s religious mission is no small part of its identity, according to Michael Novak, a Catholic philosopher and journalist who previously served as scholar of religion, philosophy and public policy at the American Enterprise Institute.

“The fathers (priests) who founded Duquesne give special honor to the Holy Spirit, the fire of Love that flows from the Christian God,” Novak told The Fix in an email. The school’s full name is “Duquesne University of the Holy Spirit.”

Silence on religion in job interview

Duquesne wants the board to apply a 1972 Supreme Court decision, Catholic Bishops of Chicago, that generally exempts religiously affiliated schools from NLRB jurisdiction. The PLU decision held that faculty have to perform a “religious function” to be exempt from the board’s jurisdiction.

Adjunct professors Clint Benjamin and Adam Davis testified at an NLRB hearing that the school’s “Catholic identity or Mission” never came up in their job interviews, according to the regional director’s June 5 recommendation that the board should maintain jurisdiction over Duquesne and it should negotiate with the United Steelworkers, the union seeking to represent the adjuncts.

The professors further said they were never told that supporting Duquesne’s mission “would be a condition of their employment,” the recommendation said.

When Duquesne appealed the decision to the board’s national office, postponing the negotiation, it included a footnote that implied it could fire the adjuncts who testified about their hiring, labor lawyer Moshe Marvit wrote in the pro-union publication In These Times.

The footnote in question is three dense paragraphs long and stretches across two pages. It makes the case that the two adjuncts “could connect their [composition and history of science] classes expressly to the Catholic intellectual tradition and Duquesne’s religious mission.”

The adjuncts’ testimony was “irrelevant” because the PLU decision said the NLRB wouldn’t consider faculty’s “actual performance of their duties” in mulling jurisdiction, Duquesne wrote.

“Regardless, today, Duquesne reserves the right not to rehire both professors and replace them with professors willing and/or better able to incorporate Duquesne’s Catholic, Spiritan mission into their courses,” Duquesne continued.

It used this hypothetical: If Davis, who teaches history of science, “improperly denigrated the sacrament of the Eucharist” because his textbook mentions transubstantiation, “Duquesne would have the right to take adverse action.”

Getting between Duquesne and its adjuncts would mean the NLRB would have to judge whether Duquesne let go an adjunct because he “denigrated its mission” or due to the school’s “anti-union animus,” the school concluded: That is “just what the Supreme Court in Catholic Bishop sought to avoid.”

Davis told The Fix in a phone interview that he felt targeted by the footnote. “I feel that it is threatening language and largely in response to the fact that I testified that I had never been asked to fulfill any Catholic duties.”

Duquesne is “trying to splash cold water on anyone that might speak up,” Davis said: “I am not turning down, but other adjuncts might be more reluctant to have their voices be heard, and that bothers me.”

Benjamin, the other adjunct who testified and declined to comment to The Fix, told In These Times: “The threat was pretty bone-chilling.” He said he teaches a composition course at a community college that is identical to the one he teaches at Duquesne – neither mention religion.

Duquesne would have trouble arguing it was simply reiterating its right to only hire faculty who uphold its mission, University of Wyoming law professor Michael Duff told In These Times: “The problem with the footnote, however, is its superfluity: there was simply no reason to make the declaration” other than to scare the adjuncts who testified.

Robin Sowards, a former adjunct at Duquesne and a full-time organizer for the Steelworkers, told Inside Higher Ed the footnote was essentially an open-ended threat to all adjunct faculty.

Duquesne’s administration declined to explain the footnote to The Fix, but a spokeswoman told Inside Higher Ed there was “nothing in the brief that in any way constitutes an unlawful threat” and that its “hiring practices are not influenced by an employee’s union activities.”

Duquesne President Charles Dougherty said in an April statement that the case was really about “Duquesne’s protection under the First Amendment from an unconstitutional intrusion of government control over us as a religious institution,” regardless of what the Steelworkers think.