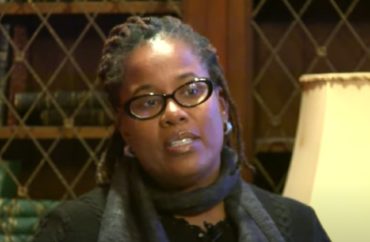 The new guide helps teachers push back against CRT bans

Journey to Justice: A Critical Race Theory Primer “includes articles, essays, lesson plans, an annotated bibliography and a COMloquium conversation that addresses and examines the perils of teaching critical race theory from kindergarten to college settings,” according to Ms. Magazine. The Karson Institute for Race, Peace & Social Justice at the Jesuit Catholic university in Baltimore helped develop the lesson plan.

The institute is led by a Professor Karsonya Whitehead (right), an advocate for the Black Lives Matter movement. She previously taught a class at Loyola about the success of BLM in using social media for its political goals.

The guide is part political activism guide and part curriculum.

Our series topics include: the legal and policy initiatives around CRT; the statewide bans in Iowa, Texas, Tennessee and Utah; school district level restrictions; a government official’s perspective on the statewide ban; mothers’ understanding of how the legislation limits children’s engagement with social justice and the need for children (and adults) to have tools to understand racism, discrimination and other topics that allow for an anti-oppressive education; and more. Additionally, we compiled a CRT annotated bibliography.

Gender identity refers to “[o]ne’s own internal sense of self and their gender, whether that is man, woman, neither or both,” the lesson plan explains. “Unlike gender expression, gender identity is not outwardly visible to others.”

“When we are born, the doctor identifies/assigns us as a boy or a girl,” sample lesson plan for the teacher says. “Based on that identification, others, sometimes including our teachers and parents, expect us to behave like a girl or a boy.”

The guide includes other suggested readings, including one essay titled “Anti-Racism Should Be Taught to Students and Their Parents,” published on October 15 in Ms.

The curriculum is a change in argument for CRT proponents and politicians, who, as Ms. Magazine said, have argued that it is not taught in grade schools.

Virginia Democratic gubernatorial candidate Terry McAuliffe said that critical race theory is not taught in schools. However, as governor between 2014 and 2018, the state education department did prioritize the teaching of CRT as a learning goal.

But in 2015, when he was last governor, his Department of Education instructed public schools to “embrace critical race theory” in order to “re-engineer attitudes and belief systems.” pic.twitter.com/iZaLrsBtoE

“Teachers nationwide said K-12 schools are not requiring or pushing them to teach critical race theory, and most said they were opposed to adding the academic approach to their course instruction,” NBC News reported in July, based on a survey it reviewed but did not link to in its article.

University of Maryland Professor Rashawn Ray said “teachers in K-12 schools are not actually teaching CRT,” in a July article for the Brookings Institution.

“Let’s be clear: critical race theory is not taught in elementary schools or high schools,” American Federation of Teachers President Randi Weingarten said in July. “It’s a method of examination taught in law school and college that helps analyze whether systemic racism exists — and, in particular, whether it has an effect on law and public policy.”