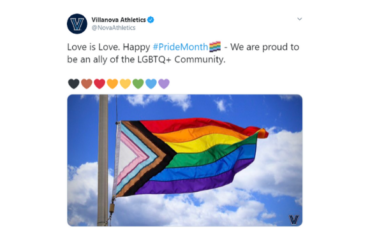 A student at Villanova University is accusing her academic advisor of trying to intimidate her over tweets critical of the university’s promotion of Pride Month.

Melanie Didioti, a graduate student at the Catholic university outside of Philadelphia, recently tweeted criticism of the school’s athletic department for its Pride Month tweet on June 22. The tweet said: “Love is Love. Happy #PrideMonth – We are proud to be an ally of the LGBTQ+ Community.”

Love is Love. Happy #PrideMonth – We are proud to be an ally of the LGBTQ+ Community.

In response, Didioti tweeted: “Villanova is proud to be an ally of the LGBTQ community and ashamed to be Catholic so I’m ashamed to attend here and that’s that.”

Villanova is proud to be an ally of the LGBTQ community and ashamed to be Catholic so I’m ashamed to attend here and that’s that pic.twitter.com/KkQcC6e4PW

She said that this led to a contentious meeting with her academic advisor in the theology department, Professor Jennifer Jackson, on June 26.

Jackson had originally claimed the meeting was just about the upcoming fall schedule, according to e-mails obtained by The College Fix.

Didioti claims that Jackson instead used the meeting to criticize her tweets. Jackson did not respond to emails from The College Fix seeking comment over the last four days.

Jackson made several statements to her, Didioti claims, that implied she could lose her academic scholarship if she continued tweeting her beliefs on LGBT issues, specifically asking her if she still needed her scholarship to attend the university. Whether Jackson has the power to revoke scholarships is unclear.

During the meeting, Jackson also allegedly warned that Didioti’s future networking could be harmed by her tweeting. Furthermore, Jackson asked Didioti to tweet her support for the theology department, the grad student told The Fix. She also posted a Twitter thread that detailed her take on the meeting.

Didioti also alleges that Jackson informed her during the meeting that she must ally herself with the LGBTQ community if she wants to truly respect all people.

In response, “I told her that Catholics should seek to help individuals, not organizations that embrace things severely against the Church,” Didioti told The Fix.

Jackson “wanted me to make public that I indeed was not ashamed to attend Villanova and agreed that we should align with LGBTQ, since that’s what the school sees is fit and falls in line with their ‘message.’ She believed Villanova’s stance was the true Catholic one, and mine was hateful,” Didioti said.

Didioti said this is the final “nail in the coffin,” that she plans to transfer out of Villanova for the more conservative Franciscan University of Steubenville.

On her Twitter thread Friday, Didioti further described the conversation with Jackson and her problems with Villanova: “In other words, if I want to survive at this Catholic institution, then I need to lie; lie on Twitter, and tell everyone that, in fact, my Catholic beliefs are wrong, and I am in full communion with the stance the school has taken.”

Hi everyone. I have news to share with regard to this entire situation.

A few days ago I tweeted a picture of Villanova social media actively aligning itself with the gay pride flag, and the LGBTQ community as a whole. Although as Catholics, we ought to love and respect all https://t.co/8NdCqkV9Mu

“It was explained to me that, despite my intents, my tweets claimed that I was not in line with the Villanova ideology (which was reiterated to me that this was a ‘Catholic’ ideology) and that is ‘truth, unity, and charity,’” Didioti tweeted.

“A Catholic institution would not threaten a student for being Catholic. It is obvious to me that I am the enemy,” she added in another tweet.

The university’s top two media affairs department officials did not respond to several requests for comment from The College Fix.