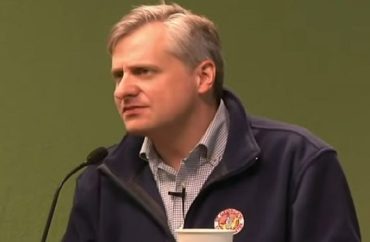 According to The Samford Crimson, students objected to Meacham’s early-October appearance at a Texas Planned Parenthood luncheon.

Samford is a private Christian institution.

“Mr. Meacham is involved with raising money in support of an organization that does not value life in the same way the Christian faith does.”

According to the San Antonio Report, Meacham was the featured speaker at the Planned Parenthood event. Discussing the “natural conflict” that comes with the “American experiment,” Meacham said “I don’t need to tell anybody in Texas about the power of the politics of fear.”

Samford President Beck Taylor notified the campus of Meacham’s disinvitation on Wednesday, saying it was important that the November 3 Presidential Inauguration event be “unifying” and “celebratory.”

A university spokesperson noted Meacham’s appearance “has been postponed and will be rescheduled.”

From the Crimson story:

During the Tuesday night SGA meeting, the Campus Services Committee referenced the online petition and introduced a resolution to remove Meacham as a speaker at an event planned ahead of the Nov. 4 Presidential Inauguration. The resolution stated that “the student body of Samford University petitions that the speaker at the presidential inauguration be a speaker that does not reject Biblical principles.”

Committee Chair Alan Crisologo stated that the issue was brought to the committee’s attention the previous day. While presenting the resolution to the SGA Senate, Crisologo said Meacham spoke at a Planned Parenthood meeting in Texas on Oct. 6 of this year. A review of the Planned Parenthood of South Texas’ website lists Meacham as its planned speaker during an Oct. 6 luncheon.

The SGA resolution was expedited and passed in the Senate that night.

According to the Inauguration Ceremony page on the Samford University website, which has since removed any mention of Meacham’s event, he was scheduled to speak on Wednesday, Nov. 3 in the Wright Center. According to Samford’s Director of Communications Holly Gainer, the speech Meacham planned to give was called “The Soul of America” and is based on his bestselling book, “The Soul of America: The Battle for our Better Angels.”

Gainer added that Meacham’s speech had “100 percent […] absolutely nothing to do with abortion.”

Samford ended up canceling on Meacham despite the Change.org petition not reaching its goal of 1,500 signatures (currently 1,022).

Read the Crimson and AL.com articles.