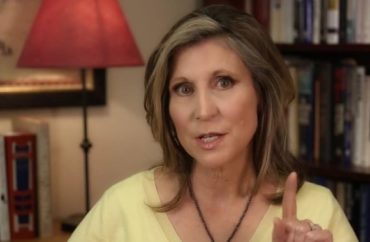 SARATOGA SPRINGS, N.Y. — Christina Hoff Sommers’s recent appearance at Skidmore College was punctuated by a fiery question and answer session where she engaged in back-and-forth discussions with several students who challenged points she’d made concerning campus activism and sexual assault.

The talk proceeded without interruptions outside of some hissing and laughing from audience members. Several campus security officers were also present.

Sommers’s speech focused largely on what she called “advocacy research,” which she described as “empirical investigations carried out by someone who cares passionately about the subject of study.”

“Their goal is not merely to find the truth, but to raise awareness, to promote a cause,” said Sommers, whose nickname is the “factual feminist.”

“Passionate advocates can do excellent research,” she said. But she also said she finds that the passion for the cause can outweigh the commitment to rigorous research.

Sommers pointed to Reuters’s coverage that found that the United States was the tenth most dangerous country in the world for women.

“None of the reporters thought to question the study’s methodology,” Sommers said. She said she reached out to the authors of the study from the Thomas Reuters Foundation, who told her their findings were based off of a poll of 500 “global experts” on perceptions of safety.

Sommers criticized the study as not scientific or rigorous enough.

“There’s just a network of researchers and activists determined to prove women’s inferior status, no matter what, and this leads them to inflate the magnitude of problems,” she said.

Sommers also decried the impact of confirmation bias on research, which one student criticized her for during the Q&A.

“As a budding researcher and a feminist, I’m a bit confused about how you started your argument talking about confirmation bias and then proceeded to give an hour-long lecture with facts you cherry-picked to support your own argument,” the student said, which drew applause from the crowd.

“Applauding for a statement doesn’t make it true,” Sommers replied with a smile.

Sommers also spoke about her multiple experiences of being shouted down and protested at other schools, criticizing the culture of shouting down speakers students find disagreeable.

“When you heckle and shout down speakers, you prevent other students from listening,” Sommers said. “I think that shouting down a speaker that other students want to hear is sort of like going up to somebody who’s reading a book and grabbing it from their hand and going, ‘You can’t read that.’”

“How can a movement that’s associated with liberation have gone in the direction of hyper-protection and trigger warnings and censorship?” Sommers later added.

“Men and women are best served by the truth,” she said, adding later that repeatedly reinforcing the idea that women are oppressed sends the wrong message to young women. “Smart activism requires a grasp of reality.”

Sommers also took issue with the controversial statistic that one in five women will be sexually assaulted during their time on a college campus, claiming that the number is actually closer to one in 40 or one in 50.

Another student took issue with these statements during the Q&A.

The student identified herself as a women’s and reproductive rights activist on Skidmore’s campus. She said her activism is motivated by narratives of oppression, saying she sees more women speaking out about their experiences. She also blamed systems in place that discourage women from coming forward, pointing to a “broken Title IX system that scares women away from reporting their assaults.”

Other members of the audience also called out throughout the Q&A, claiming colleges silence women.

Sommers responded to the assertion about activism by saying she understands how the narrative that women are oppressed can be motivating, but also argued that feminism has become too extreme and too divisive in pushing these narratives.

After the event, Sommers told The College Fix that she was pleased with how receptive and polite the audience was. She then went outside and sat on a lobby couch where she continued to discuss the issue of sexual assault on colleges campuses with students.

Sommers is slated to give a speech tonight at the University of California Santa Cruz and next week at UC Santa Barbara.