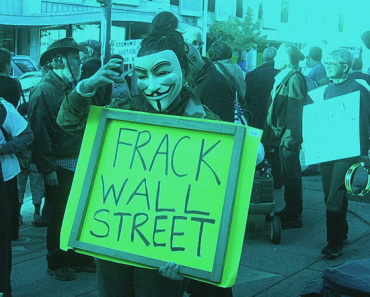 Occupy Ithaca took over the Cornell Commons on Wednesday afternoon in support of the Occupy Wall Street protests in New York City. About 200 sign-waving, slogan-chanting demonstrators lined both sides of East Seneca Street demanding an end to all things corporate.  The slogan du jour was, “We are the 99 percent,” referring to the amount of the country’s population they believe is being oppressed by the other one percent.  Their corollary to this is that all problems and disparities in society can be fixed by taxing the top one percent and the shadowy, greedy corporations who represent them.  The protesters words speak for themselves:

As passing Prii honked support from the street, some (rather violent) anti-capitalist pamphlets were distributed, MoveOn.org made its presence known, and many protesters vowed to continue their ‘fight’ – whatever it may be – indefinitely.  They plan on meeting weekly until they “turn this American Winter into an Arab Spring,” as one protest sign put it. Pictures below the jump.