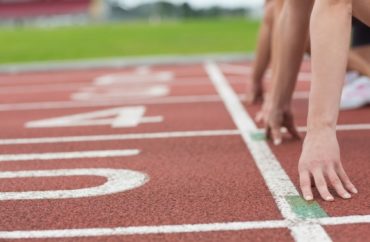 OPINION: ‘I will never support a scenario where a female has to step to the starting line to race against a male, even if that male identifies as a female. One of the best parts of competing is knowing that, on any given day, you have a chance at winning. By allowing biological males to compete against females, we strip that chance away from our girls.’

Call it nerdy, but my best memories of high school are the ones of times spent with my running club. The Delaware Sports Club met twice a week at a local track, as well as on weekends for longer runs. This club was not exclusive, as we were a group of anywhere from 30 to 100 people depending on the night, ages ranging from 14 to 80. We ran a lot, we laughed a lot, but the best part was getting to know so many people who shared my love of running.

One of the advantages of running with the club was that I got to train with boys and men. Even though our coach divided us into groups according to ability, that did sometimes mean that boys and girls, women and men, would be grouped together.

When it got closer to important races, many times my coach would have me run a workout with the older guys in their twenties who were very good runners – he wanted me to be pushed harder than the other women could push me.

My friend Dan became a consistent training partner of mine. Our coach would instruct me to stay with Dan on tempo runs and we did many track workouts together. As much as I love Dan, I hated him on more than one occasion for making me hurt so badly during workouts. Running with Dan taught me how to run through the pain. 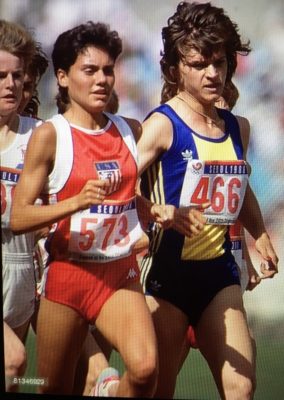 These days, as a high school track coach myself, I try to encourage the more talented girls on my team to think about doing some of their training with the boys. A high-level high school girl will be challenged by running with the mid-level boys. If she wants to be really pushed, she could try to hang on with the better boys.

For the boys I coach, many times I refer back to my workouts from when I was running professionally. An elite woman, in many ways, is comparable to a high school boy when it comes to race times and workout capabilities. (Pictured: Vicki Huber, in red, 1988 Olympic Games.)

An example of this is the world record in the women’s mile. The record was just broken this summer with a time of 4:12.33; the previous record was set in 1996. In comparison, a 4:12 mile for a high school boy is commendable, but many of the state champions would be closer to the 4:00 mark. So, quite a number of high school boys have run faster than the world record for the women’s mile.

When I recently read that two boys in Connecticut were allowed to compete in outdoor track this spring as girls because they now identify as female, I could not believe it — it had not been but a year that they had competed as boys.

Transathlete.com reported that Connecticut is one of 17 states that allow transgender athletes to compete without restrictions. Seven states require at least hormone therapy before being allowed to compete. According to Bleacher Report, the mother of one of these runners refused to discuss whether HRT (hormone replacement therapy) was involved. The mother stated that her daughter’s medical treatment did not define whether she is transgender or not.

While medical treatment may not define how a person identifies, it certainly impacts performance. Joanna Harper, who is a transgender herself, feels that there needs to be a standard based on hormone levels. She has stated “gender identity doesn’t matter, it’s the testosterone levels.”

Again, to compare male and female performances in track and field, it does not take a rocket scientist to see that the majority of males are stronger, faster, and much better than their female counterparts. Let us remember that Bruce Jenner won an Olympic gold medal in the decathlon as a male – I cannot even imagine how he would have crushed the women’s field in the heptathlon.

Soon after I arrived in Seoul, Korea, for the 1988 Olympic Games to complete in the women’s 3,000-meter race, I was informed that I needed to report for a gender verification test. I had never heard of such a thing, and was pretty nervous as to what I was expected to do. I was relieved to discover that all I needed to do was have my cheek swabbed. Cheek cells were collected and checked for possible XY chromosomes.

I only wish that there had been as much attention paid to unusually high levels of testosterone in some of the women who competed. It was obvious that some of the female athletes had resorted to injecting themselves with males hormones in order to increase their strength and stamina. That year I finished sixth in the 3,000 meter run with a time of 8:37.25.

While it is not an exact science, it has been discovered that testosterone builds both skeletal and cardiac muscle, and increases the number of red blood cells – these effects are present whether natural or artificially introduced. And differences between male and female development begin in the womb. Male champions in sports are always faster and stronger than women, meaning that by allowing biological men to compete in women’s sports, elite women -– the best women athletes in the world -– will lose to men and boys.

I completely support a scenario where males and females train together in some capacity, for I know that the women would become better runners -– I have been there.

I will never support a scenario where a female has to step to the starting line to race against a male, even if that male identifies as a female. One of the best parts of competing is knowing that, on any given day, you have a chance at winning. By allowing biological males to compete against females, we strip that chance away from our girls.