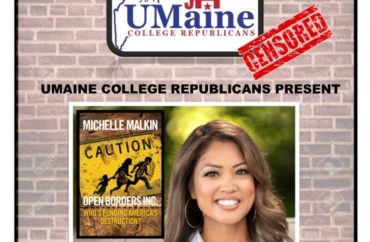 The next three venues also backed out of hosting, chapter says

The College Republicans chapter at the University of Maine can’t seem to catch a break, on or off campus.

Less than two months after the CRs were suspended based on a groundless accusation of “Nazism,” four straight off-campus venues canceled the group’s booking for an event with conservative pundit Michelle Malkin, the chapter said.

The Sheraton Hotel at Sable Oaks yanked its contract with the CRs days before the Jan. 17 event, citing the university’s derecognition of the club after its faculty advisor, who calls herself a “centrist Democrat,” quit in protest of its invitation of Malkin.

The administration claims that it didn’t tell the hotel to cancel the event. UMaine earlier told The College Fix that the student government bylaw requiring recognized student clubs to have a faculty or staff advisor was not an infringement on clubs’ speech.

The chapter said the other backup venues – the Hilton DoubleTree in Portland, the Franco American Heritage Center and the Martindale Country Club, in that order – all followed suit in cancelling tentative Malkin bookings before any signed a contract with the CRs. The Hilton denies that it even tentatively agreed to host the event, however.

The vice president of the CRs told The Fix it’s had numerous email exchanges with the Foundation for Individual Rights in Education, initiated by the civil liberties group, about its derecognition.

In a phone interview Sunday, Jeremiah Childs alleged that the university “called and pressured the [Sheraton] hotel to shut down the event and threatened” legal action against the hotel. He cited a conversation between Nick Isgro, vice chair of the Maine Republican Party, and Ed Palmer, Sheraton hotel manager.

The alleged legal threat apparently stems from the club still publicly identifying itself with the university while it’s derecognized. A university spokesperson told The Fix in an email Monday that it did not threaten copyright litigation, the specific claim leveled by Isgro and relayed by Childs, but did not answer directly when asked if it mentioned any potential legal action to the hotel.

Childs is not sure whether the CRs will take legal action against either the university for alleged First Amendment violations, or the Sheraton for breach of contract.

His group is not looking for a payout from either, but instead wants written confirmation from UMaine that it will be officially recognized, as well as an apology, Childs said.

‘They didn’t consult with us, and we certainly didn’t encourage it’

The Sabbatus venue was packed beyond its capacity, the local Sun Journal reported: “[T]own officials had to close the doors when they ran out of room in the main hall.”

In spite of the controversy, neither TV crews nor protesters came to the event. There was just one brief outcry by a female attendee, judging by the livestream The Fix watched.

She accused UMaine of trying to silence her. “It doesn’t make sense that public university officials would interfere with a private contract and a private hotel unless they’re trying to prevent the event from happening,” she told The Sun Journal after the event. Malkin called the alleged behavior “incredibly chilling” and said it was “happening everywhere” in higher education.

The Sheraton’s revoked contract with the CRs was the product of an “assist” by the university, which is using taxpayer money for “cancel culture campaigns,” Malkin said in a tweet. Breitbart characterized Malkin as telling the crowd that universities deploy “bureaucratic technicalities” to prevent students from hearing conservative views.

“We should be ashamed of tax dollars going to our university,” Childs, the CRs’ vice president, told the audience of mostly locals before introducing Malkin.

Childs told The Fix that club leadership received an email from the Hilton hotel canceling the event 15 minutes after giving the CRs a soft confirmation over the phone. He said the hotel didn’t explain the reversal other than saying that “management reconsidered.”

The Hilton DoubleTree called this claim false, telling The Fix Jan. 28 that there was “nothing definite, nor tentative to cancel.”

Brad Bosse, director of sales and marketing, wrote in an email that a CRs representative “reached out with an inquiry,” but the booking process went no further because “we were unable to accommodate to the Group’s needs on such short notice.”

It’s unclear why the Franco American Heritage Center backed out, but the country club said it received angry messages and threats of protest on its Facebook page if it hosted Malkin, Childs said.

UMaine maintains that it didn’t tell the hotel to shut down the lecture. Dean of Students Robert Dana told WGME that the university had received calls asking why it was hosting Malkin, “and we needed to set that record straight.”

While the university is “all about free speech … this was not a University of Maine event,” Dana said. “And we really needed to know what was being said in terms of the university’s involvement.”

But the Sheraton hotel canceled the event on its own, he emphasized: “They didn’t consult with us, and we certainly didn’t encourage it.”

Senior Director of Public Relations Margaret Nagle did not specifically deny that the university mentioned potential legal action to the hotel when The Fix asked.

She said the university had “received several calls early last week from members of the public” that asked about its “ties” to the Malkin event at the Sheraton. “One of those calls even suggested, inaccurately, that the university would be billed for the event,” Nagle wrote in an email Monday afternoon.

“In response to these calls, a member of the UMaine Student Life team called the hotel,” she continued. “The university made it clear that the function was not a university-sponsored event and answered questions about the student organization status of the UMaine College Republicans.”

Specifically asked again whether it mentioned any kind of legal action in talking to the Sheraton, Nagle told The Fix later Monday afternoon: “No.”

Malkin wrote on her website that Palmer, the Sheraton hotel manager, and others had told her “at least” one university official had “called to complain” about the event following the CR’s public notice. They also said “dozens of others” had called to complain, prompted by an anti-Malkin Twitter account called Support Maine’s Future, according to Malkin.

Malkin discussed legal and illegal immigration in the United States in her speech. “Every law school is training” illegal immigrants on ways to “subvert the asylum process” and “evade deportations” in seminars about their legal rights.

Asked how the United States could welcome productive immigrants legally, Malkin said it wasn’t practical. “We’re full” as a nation right now, she said, calling for a “complete immigration moratorium.”

UPDATE: The university told The Fix after this article was published that it did not threaten copyright litigation against the Sheraton hotel if it went through with the Malkin event, which was the specific claim leveled by Isgro and relayed by Childs. The Fix followed up with a broader question about potential legal action of any kind, to which the university did not directly answer. It finally answered the question directly Monday afternoon after a second query. The university’s responses have been added. The Hilton DoubleTree in Portland also denied it had even tentatively agreed to host the event. Its comment has been added.