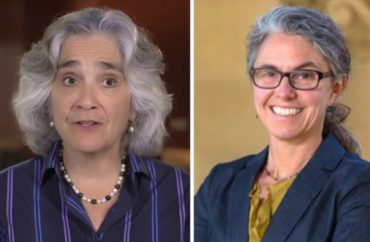 Imply that club could lose its campus funding, meeting space

“In this time of heightened tensions and fear from national and international events, we need to recognize real fear, grounded in real threats and true harm at events still raw and recent in our memory — El Paso and Gilroy, Pittsburgh and Poway.”

What prompted Stanford administrators to make this reference to mass shooters and domestic terrorists? The Stanford College Republicans advertised their event with conservative pundit Ben Shapiro.

Provost Persis Drell and Vice President for Student Affairs Susie Brubaker-Cole (left and right, above) wrote the message to voluntary student organization leaders and student residential staff Nov. 7, and emailed it to the whole community that afternoon.

At the time it was sent, The Stanford Daily excerpted just two benign sentences from the email, leaving out administrators’ association of flyering with killing people. A doctoral student who received the email, Scott Borgeson, recently posted it.

While they don’t mention the Shapiro event specifically – which would take place that evening – the administrators say that “campus dialogue has heated up around flyers, and ideas evoked in those flyers,” for the past few weeks.

Without naming the SCRs, the administrators refer to a “student group” that attempted to post flyers in campus dorms including the Hispanic-themed Casa Zapata.

“[S]ome of the behaviors that have accompanied these practices have crossed a line of respectful treatment that we feel need to be addressed head-on,” they wrote. “We have learned about exchanges that included verbal threats and intimidating behavior”:

The SCRs had claimed they were greeted by “an aggressive mob of students” at Casa Zapata, who shouted obscenities at club members and tailed them as they went to other dorms to post flyers. Stanford has yet to tell The College Fix or the Foundation for Individual Rights in Education how much leeway dorm staff have to regulate flyers.

The behaviors attributed to the unnamed student group “do not comport with our expectations for a caring, respectful community,” the administrators continued in the Nov. 7 email. Regardless of “potential outcomes” of a disciplinary investigation into the group, every member of the community must extend “basic human dignity” to others.

They implied that the CRs could lose their campus funding through student fees and “access to campus spaces for meetings and events. With these privileges, we have the highest expectations of your behavior and the ways you engage with fellow students.”

At this point the administrators connected the unwanted flyering of dorms with the targeting killings of Mexican immigrants, Jews and festival goers:

We need to respect that there are people on our campus who just want to feel safe and secure inside their homes and community spaces. Casa Zapata and El Centro Chicano y Latino have been particularly impacted by these events, and we ask our campus community to extend care and support to Casa Zapata and our broader Latinx community.

At this point the administrators seem to make an about-face, saying they have asked “student residential staff to continue discouraging students from tearing down or defacing flyers” even if they offend residents. They don’t explain how this message comports with the one-sided blame they put on the unnamed “student group.”

Borgeson, the doctoral student who posted the email, wrote a blistering open letter to Drell in The Stanford Review late Monday. A member of the SCRs, he said the club followed “all University policies and all rules of common decency” in advertising the event “and certainly did not engage in violent behavior of any kind.”

In contrast, the SCRs “encountered levels of vitriol that were downright appalling,” and not just from the Casa Zapata residents who physically threatened them: “When they messaged one dorm group chat, they were challenged to a physical fight.”

Drell’s response to this “campaign of hatred” was comparing club members to “domestic terrorists”:

How dare you attempt to weaponize the tragic losses of life that took place in these cities, Provost? How dare you compare the violent mob that confronted the members of SCR to the victims of the El Paso shooting—as if those students screaming at them that night were merely victims, merely innocent bystanders, rather than a violent mob attempting to silence their opposition.

How dare you compare the members of SCR to cold-blooded killers? Do you understand the sort of real-world consequences these words have for your students? On this very campus, Provost, members of SCR have had a rock thrown at them and paint dumped on them for the crime of inviting people to sit down and engage in civil discussion. Were you unaware of those events, Provost? Do you not care about the actual violence that is being done to your students, because of their political views? And do you think your words will have made it any better?

It was especially appalling for Drell to compare the club members to the anti-Semitic shooters, given that Stanford’s progressive students passed out flyers depicting Shapiro as an insect to be exterminated, Borgeson wrote: “[F]or someone so eager to concede that our speaker and his ideas were ‘abhorrent,’ you yourself were remarkably silent on the topic of ‘Ben-B-Gon.'”

The doctoral student calls it “an absolute farce” that Drell and Brubaker-Cole lectured the SCRs about their “collective responsibility” to make sure that everyone “feels respected and safe”:

He demands the Drell apologize for talking about the SCRs “in such a disgusting manner,” denounce the “actual intimidation that our members have faced” and call out perpetrators by name, and “stop making excuses” for students who are mature enough to not have “a meltdown” and physical intimidate their peers for posting “Ben Shapiro’s face on a flyer.”