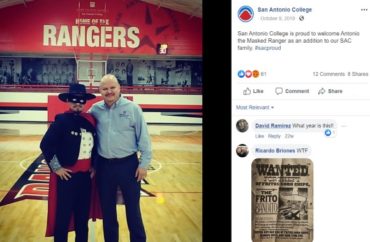 Some students and professors at San Antonio College are upset over the school’s new mascot, “Antonio the Ranger,” saying it typifies ethnic stereotypes and glorifies historic violence against Mexicans and Native Americans.

Efforts against it began in earnest last fall when the mascot was first revealed, and continued through spring 2020, only being stalled by the COVID-19 pandemic.

As recently as March, the main student group protesting the mascot, Somos La Gente, continued to work against it, organizing meetings and sending educational emails, according to a post on its Instagram account.

“We have some very important ‘Change The Ranger’ events happening after [spring] break,” the group posted in March. Somos La Gente declined to comment to The College Fix on the matter.

It’s likely the group will pick the issue back up come fall, after San Antonio College resumes on-campus classes at the large community college.

“What people are going to take away from this is that it’s now some kind of Latino bandit,” Nati Román, a Mexican American Studies major and vice president of Somos la Gente, told TPR. “It kind of plays into those old stereotypes that were very prevalent in our media and Hollywood of the Mexican bandit.” 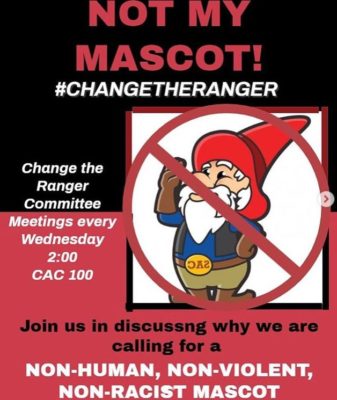 As a result of the controversy, College President Robert Vela directed his staff to get rid of the mask but not eliminate the entire mascot without first going through the student government, TPR reported, adding the president of the college’s student government said there’s support for the mascot and it’s better than the previous one, the “Gnome Ranger.”

According to the college’s website, its official mascot is the “Rangers,” which dates back to 1926 when the college newspaper was originally dubbed the “Junior Ranger.” The “Gnome Ranger” debuted during the 2013-14 school year.

“It looked like a dwarf, with a white beard, red hat and brown belt,” reports Texas Public Radio. “At the time, college officials said the Gnome Ranger was a way to distance the college from the ‘historical controversy’ surrounding the Texas Rangers.”

“Students with Somos la Gente, however, think any association with the Rangers is inappropriate because the Texas Rangers started out as a vigilante group that killed Mexicans and Native Americans.”

A petition launched over the controversy decries the Ranger mascot:

In addition to ignoring students who find having a symbol of Mexican-American oppression as a long time mascot offensive, San Antonio College has recently adopted a new mascot who is suggested to be a “masked ranger,” with the appearance of a stereotypical Mexican bandit. When the Texas Rangers lynched Mexican-Americans for refusing to give up their lands, our ancestors were often accused of being bandits and/or of committing crimes in order to justify the atrocities committed by the Texas Rangers. The mask was recently removed from the “masked ranger” but “Antonio,” as they have named him, is still the mascot.

Some professors at the college also back the activists. Eight history faculty submitted a letter to the editor of The Ranger campus newspaper calling for a “conversation” on the matter.

“The choice of ‘Antonio the Ranger’ as the new SAC mascot is reflective of ethnic stereotypes of Mexican Americans as ‘bandits,’” the letter states.

“This is part of a broader national issue of using indigenous people as mascots. It furthermore conflates historical actors with their victimizers by evoking the name of the Texas Rangers, which at one point was a paramilitary organization that terrorized communities such as Porvenir in the U.S.-Mexican borderlands,” it added.

“This choice not only ignores the historical trauma associated with the Texas Rangers; it also retraumatizes SAC’s Chicanx students and community members less than three months after the El Paso shooting — an act of terrorism against Mexican American and Mexican communities.”

San Antonio College is not the only school that has dealt with mascot controversies.

In 2018, Cal State Long Beach ditched its mascot “Prospector Pete” after some on the campus community said it represented racism and genocide against Native Americans.

About the Author
Kassie Vickers
Kassie Vickers is a student at Victor Valley College majoring in political science. On campus, she is very active with the Model United Nations. After she earns her bachelor's degree, she plans to attend graduate school and pursue a career in politics and journalism. In her free time, Kassie enjoys keeping up on current events and watching stand-up comedy.