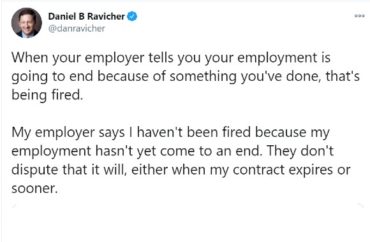 A pro-Trump professor at the University of Miami Law School said he expects school officials to fire him for his social media comments in support of President Donald Trump and his other comments on the 2020 presidential election.

Dan Ravicher, a law professor at the private university, recently came under fire for his tweets leading up to Election Day as well as his tweets in the subsequent days. Ravicher warned of potential protests if Trump won re-election and he also made comments about the voting patterns of African-American and Latino voters.

Now, Ravicher said that he believes he will be fired soon by the university.

“It’s all very ambiguous as a result of the university sending mixed signals,” Ravicher told The College Fix via Twitter messaging on Monday, in response to questions if there had been any disciplinary action taken against him and if he will be teaching in the spring semester.

When your employer tells you your employment is going to end because of something you've done, that's being fired.

My employer says I haven't been fired because my employment hasn't yet come to an end. They don't dispute that it will, either when my contract expires or sooner. https://t.co/8LMKFAwXkV

“The dean told me that I have to apologize and retract my statements and if I don’t I won’t have my contract renewed and something more immediate could happen,” Ravicher said.

“He [Dean Anthony Varona] says I’ve made a grave mistake, must correct it, and time is running out. All very ambiguous language. While I do currently have a course listed in the spring I’ve told students not to register for it because there’s a likelihood I won’t be here,” Ravicher said.

Heading to @Walmart to get what I need to protect my family from "peaceful protesters" who can't accept the result of an election.#SecondAmendment #StandYourGround

Ravicher referred The Fix to an email exchange he had with Varona, the dean of the law school.

“We are trying to get through to you, heart to heart, to say that you made a serious mistake and that you can, and should, correct it,” Varona wrote to Ravicher on November 11. The dean referenced a call on Saturday, November 7.

“Your reply to me on Saturday during our call was that you (respectfully) declined my advice and request and would keep doing what you are doing — despite the fact that what you have been doing is causing so much divisiveness, and is offending and insulting and hurting even those who support you,” Varona said.

The dean repeated that he was not admonishing Ravicher for being conservative, but for several of his tweets.

The dean did not respond to multiple emailed requests for comment from The Fix on Monday and Tuesday asking to confirm the content of the emails and to describe Ravicher’s current status and if his contract will be renewed.

The Fix did not receive a response to an email Tuesday morning to the university media relations office seeking information on the professor’s status.

In a letter to the editor to The Miami Hurricane, the student newspaper, Ravicher further defended himself.

“The Faculty Manual also speaks for itself; things said by faculty in their private life shall have no bearing on their continued employment,” he said.

But not for me, a conservative. Instead, I’ve been pushed out, told I will no longer have a job if I don’t retract my statements and apologize (which I won’t do) because some students, faculty, administrators, and alums don’t like what I’ve said on social media. Congrats to the warriors of cancel culture that infect higher education today.

Twenty of Ravicher’s law school colleagues signed onto a letter to the editor in the campus paper that criticized his comments.

“Our commitment to our students during this time, as faculty, as officers of the court and as professionals, is to exercise judgment and leadership in our public engagement­,” the letter said.

Professors should not “attack or appropriate vulnerable communities or promote unfounded claims that further destabilize this moment in American democracy,” the signers argued.

The letter did not call for Ravicher’s termination, however.

MORE: Professor says he was fired for using ‘racially offensive’ term in class