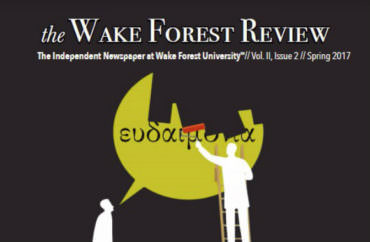 ‘He would be willing to discriminate against what organizations get chartered’

The chair of Wake Forest University’s publications committee did not have many nice things to say about the conservative student-run newspaper on campus.

“Negative and divisive” and “propaganda” were some of the terms used by Remi Lanzoni, professor of Italian, to describe The Wake Forest Review in an email after the committee met on Sept. 22.

Lanzoni was talking about the paper, which is independent of the university and was not present at the meeting, because another committee member praised the quality of the Review’s work in contrast to officially recognized student publications.

In a partial email posted by the Review late last month, Lanzoni wrote that the newspaper’s “content and delivery is problematic for an endorsement on a college campus.”

The Review is using the incident to highlight why it has steered clear of official recognition and the potential entanglements it involves.

“Wake Forest Review made a choice to be independent anticipating something like this,” Digital Editor Ryan Wolfe told The College Fix in a phone interview. “I don’t think we want to paint all professors or administration in one broad stroke, but we did know there were going to be some bad apples.”

In response to Lanzoni’s comment about official recognition of the Review being “problematic,” Wolfe said: “The most problematic thing is that he would be willing to discriminate against what organizations get chartered and which ones do not based on the point of view they express.”

The Review got on the bad side of progressive faculty most recently by reporting on their attempt to shut down a research institute on campus partially funded by the Charles Koch Foundation.

This was the first time in two years the publications committee had met to discuss its work, Robert Bliss, a business professor on the committee, told The Fix in a phone interview.

It “was very different from the meeting two years ago,” which lasted about 30 minutes and featured little discussion, he said, stressing that his opinions are his own and don’t represent the university or committee.

In contrast, two representatives of student publications, the Old Gold & Black and The Howler, made presentations at the Sept. 22 meeting, and people could ask them questions. Seven attended: four faculty members, Associate Dean and Director of the Wake Forest Scholars Program Thomas Phillips and the publication representatives, according to Bliss.

“Wake Forest Review had no one at that meeting. We didn’t know what was going on,” Wolfe said.

In its report on Lanzoni’s email, which it did not fully publish, the Review said Provost Rogan Kersh and Dean of Students Adam Goldstein had encouraged the paper “to seek a charter” from the university. The Review declined, so as to “avoid University overreach.”

Phillips declined an interview request from The Fix and Lanzoni, Kersh and Goldstein did not respond to emails.

The future of the publications committee is a mystery.

“I think that is the biggest problem with this. No one really knows. There is no real understanding of what the scope of this committee is,” Wolfe said.

Bliss hopes the committee is more prominent in the future, but he also had no idea what its role would be going forward.

Deserves same treatment as official student paper, which is ‘amateurish’

The business professor was critical of the publications whose representatives made presentations, according to an email obtained by the Review that appears to be partially posted.

Bliss praised the “production quality, the breadth of coverage, and the writing” in the Review, including its article about professors’ attempt to shut down the research center funded by the Koch Foundation. He said he had never read the Review until “yesterday.” (The date is not shown on the email image.)

“I see nothing objectionable” about the Review, which “should be accepted and provided the same visibility on the university’s web site” as the Old Gold & Black, Bliss wrote.

In contrast, he called the Old Gold & Black an “amateurish” publication with poor opinion writing and which lacks “adult supervision,” and described The Howler, the school yearbook, as having an “existential problem.”

Bliss told The Fix he had two concerns: oversight of the quality of the student publications and how well they are serving the student body.

“My belief is a paper that is chartered by the school and receives money from the school is intended to serve the whole student body,” he said.

MORE: Michigan Daily fired columnist because he mocked their ‘experiences’

The Review provided The Fix Lanzoni’s full email, which was sent to the members of the publications committee in response to Bliss’s email praising the Review and criticizing official student publications.

Lanzoni said he was “still learning the modus operandi” as the new committee chair:

He said the hourlong meeting was “quite productive” and he appreciated the participation of faculty members and testimony from the student media editors-in-chief. Responding to a section of Bliss’s email that the Review apparently cut off, Lanzoni said the committee was “valid” and not a “sham”:

I am sorry that Dr. Bliss is thinking otherwise, so for the records [sic] I would like to rectify this statement on behalf of this committee.

Whereas Bliss praised the “careful thought, reasonable logic and supporting evidence” in a Review opinion piece about the “Non-Inclusive Women’s March” organizers speaking on campus, Lanzoni criticized the first line of the opinion piece, which reads:

Tomorrow, Wake Forest University will reach an all-time low in terms of who it brings in to preach liberal tolerance.

This style of writing explains “why this type of publication cannot be endorsed by Student Government and funded by the Student Budget Advisory Committee,” Lanzoni wrote.

Lanzoni told committee members that he and Phillips, the associate dean, “began a conversation to see how to best proceed in this matter” of the committee’s role going forward, which should include “positive reinforcement” for student media “without interference from us.”

Sabin Sidney, executive director of the Review, did not agree with Bliss’s assessment of its official competition.

“We take issue with Professor Bliss’ characterization of the Old Gold & Black as ‘amateurish,’ and applaud all students who work diligently every week to make such a strong publication,” Sidney wrote in a statement.

The professor told The Fix that the Review’s Sept. 28 article was a divergence from well-written material and that it makes it hard for him to argue for the Review being recognized by the university.

“I thought it was an uncalled-for personal attack, and I have written in my comments to [Wolfe] that I think we can discuss issues of independence without having to resort to that type of language he used,” Bliss told The Fix.