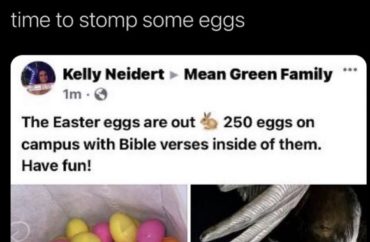 Conservative students at the University of North Texas have been attacked for their Bible verse Easter egg hunt, with many in the campus community calling for a mass trashing and stomping of the eggs.

The members of the UNT Young Conservatives of Texas, which organized the effort, had sought to spread a message of positivity and hope during this week, considered “Holy Week” by Christians that concludes with Easter.

On Sunday night, members of the two-year-old campus group distributed about 250 brightly colored plastic eggs on campus with Bible verses printed inside.

The public university is in session with students on campus this week, and with the stress of COVID, the Young Conservatives sought to spread a little joy, said Kelly Neidert, the chapter’s president.

“We wanted to do something for Easter but we can’t do activities because of COVID, so we thought the Bible verse Easter egg hunt would be a fun, easy way to celebrate without breaking social distance policy,” she said in a telephone interview Monday with The College Fix.

“Half [of the Bible verses] were passages about Easter and Christ, and the other half were uplifting verses that weren’t really related to Easter, but we thought would be nice to find,” she said.

Instead, she and her club members were attacked and vilified on online campus groups, such as on a UNT Facebook group that includes about 9,000 students, parents and alumni of the school, she said.

The backlash started with some parents on the group saying it was inappropriate to conduct the effort since not everyone on campus is Christian, and the students should have just filled the eggs with candy if they wanted to do something nice.

But then students joined in the criticism, and took it to another level, Neidert said.

“They were trying to see who could go throw the most [eggs] away and who would stomp on the most of them,” she said.

Neidert provided screenshots to The College Fix of the bashing. In addition to taunting the Young Conservatives that their eggs would be trashed, some students accused them of littering.

One person joked about a “capture the egg” contest and another suggested a prize for anyone who could trash the most.

After my fellow students destroyed my org’s abortion memorial, I should have known they would go out and destroy our Bible verse Easter eggs pic.twitter.com/bh7twPNIyK

However, the Young Conservatives had written down everywhere they had placed the eggs and always had plans, and still do, to retrieve any leftovers later this week, Neidert said.

As for critics who said they should have put candy in the eggs instead of Bible verses, Neidert said that misses the whole point.

“There is no way to separate celebrating Easter and Jesus, those things go hand in hand,” she told The Fix.

Neidert said the reaction from the campus community has been disappointing as the Young Conservatives had sincerely thought this was a good way to spread positivity.

“We were all super excited when we brainstormed the idea and picked verses together, we thought everyone can appreciate it, you don’t even have to be Christian to read a [Bible] verse and appreciate it,” she said. “We are very disappointed this is how it’s gone down.”

Neidert said she even was told by a fellow student in a direct message to kill herself.

“Honestly, it happens a lot more than it should,” she said. “I was upset like anyone would be but I had to understand they are mean people and they don’t know how to handle someone who has a different opinion than them.”

“Their first instinct is to be violent and make threats. The only reaction is to be nice to them and don’t let them get to you.”

Neidert is no stranger to peers coming at her. Last year, she was the target of literal witch hexes on campus.

“It’s considered normal for these people to hex me and hex my friends, nobody bats an eyes to it,” she said.

“But when I try to go put out some nice verses for my classmates, it’s like I committed a crime.”