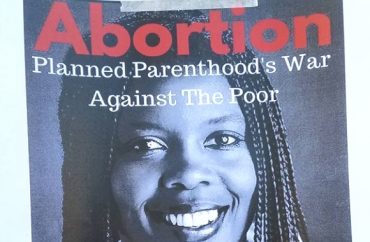 A conservative student group at Cal State LA made up mostly of black, Latino and Asian students was targeted Thursday by verbal assaults and vandalism protesting the club’s plans to host a conservative black female speaker on campus.

Young Americans for Freedom is set to host activist Star Parker Oct. 18 for a talk titled “Abortion: Planned Parenthood’s War Against The Poor.” Campus flyers touting the event were ripped down by two black females, who when asked why they were tearing down the flyers replied “because you all are f*cking retarted, that’s why,” a video of the incident released by the foundation shows.

What’s more, the group’s Facebook page was hit Thursday with vicious comments, including one post which said: “For all you bigots, especially POC sellouts and coons of YAF,” and linked to a picture of a tweet saying, “welcome to america the country that is run by straight cis white males that believe abortion is cold murder but killing black people is not,” according to screenshots.

Only four of the Cal State LA YAF group’s 60 members are white, and the rest are black, Hispanic and Asian, according to Mark Kahanding, president of the group.

“These attacks are disgusting and would be met with uproar had they been carried out by conservatives,” stated Emily Jashinsky, a spokeswoman for YAF.

Parker is founder and president of the Center for Urban Renewal and Education, a public policy think tank that promotes market-based solutions to fight poverty, according to its website.

Parker’s message was sought out by members of the club. A large percentage joined last spring, after the group hosted conservative speaker Ben Shapiro on campus in February and a mob of angry student activists tried to shut the speech down by calling Shapiro racist and blocking the entrance. “They all came together after the Shapiro event,” Jashinsky told The Fix. “They just have some fascinating stories. All of these people who we’re told aren’t attracted to conservative ideas, in fact, were completely inspired by them after seeing how their school tried to censor Ben. They spend hours every week together working on activism.”

And those efforts are met with constant bullying and resistance from peers. Thursday’s incident marks the latest in a string of attacks against the club.

“It’s unfortunate to say, but this not really new for us,” Kahanding, president of the group, told The College Fix on Thursday. “Every day we get called really horrible and racist names.”

After the club hosted Shapiro, flyers and posters placed around campus called them a “hate group” and the “KKK.” Last month, flyers advertising a speech by Christina Hoff Sommers they hosted — a talk titled “Where Feminism Went Wrong” — were ripped down by a female student who called the posters offensive, according to a video of the incident.