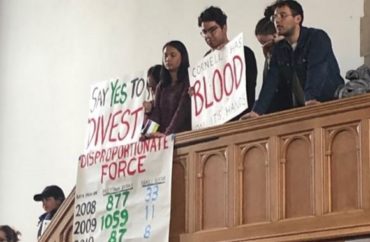 ITHACA, N.Y. — A student government resolution that called for Cornell University to divest from Israel over Palestinian occupation was narrowly voted down Thursday after a heated and lengthy debate.

The resolution failed despite the fact that a majority of Student Assembly members voted to approve it. That’s because the assembly allowed undergrads in the audience to cast two “community” votes based on its majority opinion, and those votes went against the measure.

After a nearly three-hour debate, the resolution was voted down in a secret ballot. The final tally was 14 in favor and 15 against, including the two community votes, and one abstention. 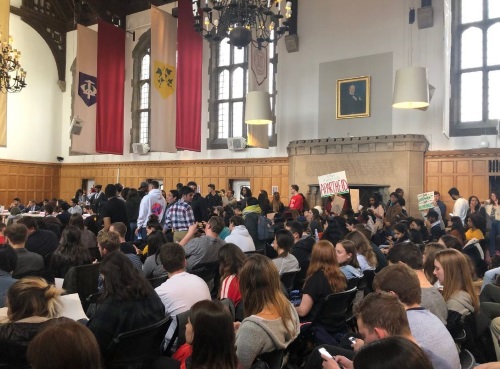 The lengthy debate leading up to the vote was filled with student speakers arguing for and against the resolution, which accused Israel of murdering Palestinians and other human rights abuses. A crowd had packed with meeting room, with some students sitting on the floor and in hallways. One large poster hung on the side of the room listed the larger number of Palestinians deaths versus Israeli ones over the years. Another student held a sign that said “Cornell has blood on its hands.”

Prior to the vote, the open-mic session saw a particularly moving denouncement of the BDS movement from Cornell senior and Israeli national Shir Kidron.

She said she chose Cornell because of its commitment to inclusion and being a safe place for Jewish people. She juxtaposed this commitment to her upbringing near the border with the Gaza strip, where she was taught to run to bomb shelters. When she was 12 years old, her home was targeted by a Hamas rocket strike, which collapsed her bedroom and killed her dog.

After playing bomb-shelter sirens from her neighborhood and detailing her harrowing experience, Kidron said “I was a little girl who almost died because I was Jewish, because I was Israeli. In Israel, this terrorism against Jews, against Israelis, is normal.” She went on to say “the trauma of being attacked for your identity leaves the deepest scar that will never fully heal.”

(Kidron had also detailed her experiences last week in a Cornell Daily Sun column. The column faced immense backlash online. The Cornell Collective for Justice in Palestine responded to the op-ed by stating “Palestinians have a moral and legal right to use armed struggle…” and “quit complaining about how it (the rocket strike) ruined your brunch plans.”)

As for Thursday’s vote, it followed more than a month of debate about the Boycott, Divestment and Sanctions movement among the campus community. No less than six columns on the matter were published in the Cornell Daily Sun, drawing hundreds of comments on social media. The issue hotly divided the Ivy League university.

Advocates for the BDS movement claim that American companies and institutions ought to cut ties with Israel over perceived civil rights abuses. In a statement on Facebook, Cornell Students for Justice in Palestine, the organization that helped draft the resolution through allied senators, asserted that “This is our chance to show the SA that we will NOT let our tuition fund oppression.” Their resolution had the support of 22 student organizations at Cornell. SJP declined to comment to The College Fix.

But the measure faced stark opposition from a variety of student organizations, most notably Cornell Hillel. They assert the measure unfairly singled out Israel and fed into a divisive narrative.

Following the vote, Cornell Hillel leaders Rabbi Ari Weiss and Jillian Shapiro reaffirmed in a Facebook statement “that BDS is not an effective way to reach a moral resolution of the complex conflict existing in the Middle East and that BDS causes deep polarization among the Cornell campus community.”

“We are grateful to the hundreds of members of our community who showed up tonight and voted in support of Israel!”

In a February letter to students, Cornell President Martha Pollack had advocated against the call for divestment, stating “…it places all of the responsibility for an extraordinarily complex geopolitical situation on just one country and frequently conflates the policies of the Israeli government with the very right of Israel to exist as a nation.”

Cornell senior Issac Schoor, the vice president of the College Republicans and one of Cornell’s chief opponents to the resolution, praised the vote’s defeat.

“Resolution 36’s defeat represents—first and foremost—the lifting of an incredibly unfair burden off the shoulders of the Jewish community here,” he told The College Fix. “For months, Jewish students on this campus have had to spend enormous amounts of physical and emotional energy worrying about and fighting the resolution.”