A now-former member of Cornell’s Alliance for Science fellowship is blasting the university as “racist” after being informed they would no longer be welcome in the program.

The Alliance for Science program is designed to “equip and empower emerging international leaders who are committed to advocating for science-based communications and access to scientific innovation in their home countries.”

Julia Feliz (who uses the plural pronouns “they” and “them”; we used “she” and “her” in the article title to avoid any grammatical confusion) wrote extensively about their predicament which began in early October, according to The Cornell Daily Sun.

Feliz accused a visiting professor from Iowa State of using “racist and sexist terminology” and of “[speaking] loudly and walk[ing] towards them to intimidate them” after they asked a question.

The professor “unequivocally” denies all the accusations.

But the heart of the matter is Feliz’s (alleged) monopolization of instructional time for social justice activism, according to the university and other students in the Alliance for Science program. Feliz claims Cornell accepted them (meaning, Feliz) “fully knowing that [they] were a scientist and social justice activist”; however, Cornell Senior Director of Media Relations and News John Carberry noted that Feliz “engaged in behavior that caused numerous and repeated complaints from other fellows over many weeks”:

It became clear that the educational experience of other fellows was being compromised due to ongoing interruptions of classroom lectures and discussions by Mx. Feliz. Cornell staff made many attempts to support and work with Mx. Feliz, including referrals to appropriate university offices to explore Mx. Feliz’s allegations of discrimination in the program; however, Mx. Feliz chose not to take advantage of independent university support programs, instead raising Mx. Feliz’s concerns within the classroom, leading to additional complaints from other fellows.

Feliz asserts that as a “Person of Color from the US living in Trump’s America, [they] couldn’t exactly divorce” the discussion topics from social justice.

Unsurprisingly, the Cornell Student Assembly passed a resolution on Thursday supporting Feliz; however, Alliance fellows in attendance at the meeting all spoke out against the measure (and Feliz).

Patience Koku from Nigeria said “the fellowship was an inappropriate forum for Feliz to make comments on social justice” while Rwanada’s Pacifique Nshimiyimana told the S.A. it “had only one side of the story here.”

Rose Mukonyo from Kenya told the S.A. that Feliz “was an activist in sessions” and that their “activism came out in every single session that we had.”

Feliz referred to these testimonies as “NeoColonialism in real time.” And, like many other college activists today, they issued numerous demands:

1. Acknowledgement of wrongdoing and an apology from Cornell University

2. The certificate for Science Communication that I was 3 weeks away from receiving

3. Inclusion of fellows in Cornell’s system of due process recourse for unjust discipline, and a requirement for mandatory reporting by faculty of discriminatory behavior

4. Sensitivity training for faculty addressing neurodivergence (and necessary education accommodations), gender identity, and Black/Brown/Indigenous cultures — each led by a member of the relevant community.

5. Safe spaces on campus for marginalized students, fellows, and staff hosted by workers (that are not Cornell staff or HR) where these communities can find support and guidance without fear of retaliation

Saturday featured a protest in support of Feliz; the former Alliance fellow posted photos of the event on their Facebook page. 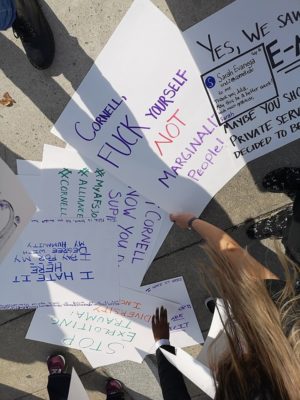 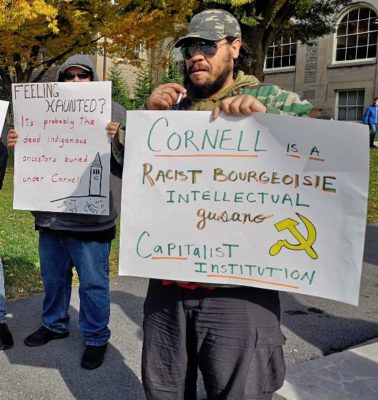 MORE: Cornell seminar asks: Should we still use concepts like ‘rationality’ and ‘reason’?