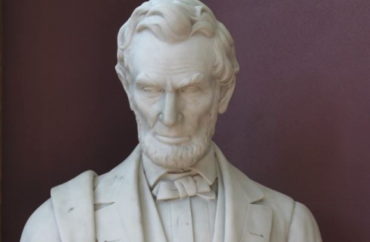 Decision comes amid concerns over its removal among some donors, alumni

A bust of President Abraham Lincoln that was quietly removed from a Cornell University library during the summer of 2021 after a concern was lodged will once again grace the halls of a library at the Ivy League school.

Elaine Westbrooks, the Carl A. Kroch university librarian at Cornell, said in a statement Thursday the bust of America’s 16th president is slated to soon be placed where it originally debuted — the school’s Uris Library when it opened in 1891.

“Over the summer, I directed the cleaning and return to public exhibition of a bust of Abraham Lincoln, a valuable item in the Cornell Library’s vast permanent collection,” she said in a written statement provided to The College Fix. “The bust will soon return to its original room in Uris in the heart of our Ithaca campus.”

Westbrooks was tapped as librarian in March 2022, roughly seven months after the bust was removed from the Rare and Manuscript Collections section of Kroch Library. The bust had been displayed there in front of a decal plaque of the Gettysburg Address since 2013.

“The Lincoln bust … had been featured in a temporary exhibit commemorating the 150th anniversary of the Gettysburg Address. That exhibit ended in August 2021 and the bust was moved to storage. Subsequent questions about this curatorial decision inspired thoughtful conversation among library staff. I was moved by the outpouring of interest in this historic artifact and made plans to return the bust to public view,” Westbrooks said.

The bust was modeled from life just before Lincoln’s assassination in April 1865. It was created by American sculptor Vinnie Ream, the first woman to be granted a federal commission by the United States, according to the university’s website. It was purchased and donated to the campus by Ezra Cornell, founder of the university.

Its scheduled return to public viewing comes amid concerns over its removal among some Cornell donors and alumni. The public was first alerted of its removal by an article in The College Fix in late June 2022. 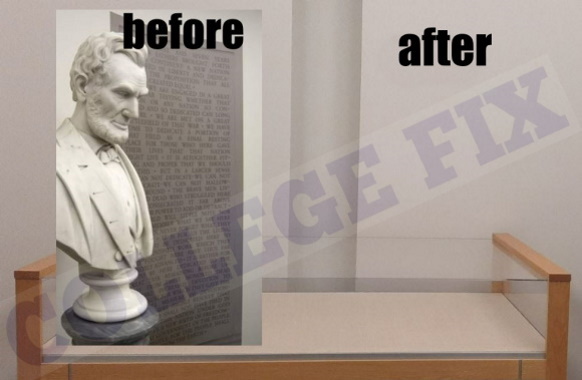 The Fix was told of the situation by Cornell University biology Professor Randy Wayne, who said at the time that when he asked around about the display’s fate, all he was told was: “Someone complained, and it was gone.”

In the months that followed, Wayne said he received an outpouring of responses from alumni grateful he sounded the alarm. He then prepared a report for the Cornell Free Speech Alliance about the controversy.

He said some donors and alumni were concerned about the bust’s removal as well as arguments from campus leadership that denied his claim the bust was a victim of cancel culture. Instead, administration said it was always only a temporary display, despite the fact it had been up for eight years.

Wayne’s report detailed a meeting he had in mid-July with Westbrooks on what might have prompted its removal.

“She thought that ‘complaint’ was too strong of a word but acknowledged that a ‘concern’ was brought up in 2020 about the exhibition containing the bust of Lincoln and the decal of the Gettysburg Address, and as a result, the exhibition was removed in August 2021,” according to Wayne’s report, a copy of which was provided to The College Fix.

Wayne’s report also noted some alumni might be interested in funding a permanent display for the bust, and described Westbrooks as “a great steward” of the Cornell library system who agreed at the time to bring back the bust at some point in the future.

Westbrooks’ statement Thursday also noted that: “Cornell proudly possesses an enviable Lincoln collection, including one of the five known copies of the Gettysburg Address in Lincoln’s handwriting, and one of 14 manuscript copies of the 13th Amendment with the original signatures of Lincoln and members of Congress who voted for it. In addition to the Lincoln bust, the university also owns and displays a Lincoln statue in Uris Library.”

In an email Thursday to The College Fix, Wayne said he is thrilled, and added its new location in the Uris Library offers it even more visibility than when it was in the Rare and Manuscript Collections section of Kroch Library.

Asked what role concerned alumni and donors had in the decision to re-display the bust, Wayne said he believes it was a big one.

“They made all the difference,” Wayne said via email. “The alumni and donors have a deep love for Cornell and have sincere gratitude for the education that they got here. They did not want cancel culture to ruin it for their grandkids.”

MORE: Here’s why, as a professor, I fight against critical race theory and DEI at Cornell