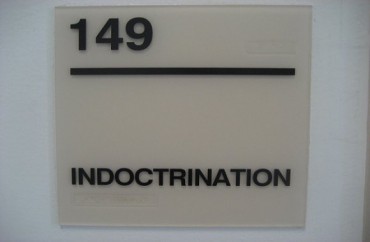 The truth about campus indoctrination is that it is a slow, steady, insidious process.

Campus liberals, aka “professors,” don’t just hand out the Communist Manifesto at freshman orientation. First-years are not instantly thrown into a new-age drum circle and told to join in. Not because professors wouldn’t like to see that happen, rather it simply wouldn’t work.

Indoctrinating students is a gradual process. How do I know? It’s the story of my life.

This fall will mark my final year in higher education at UC Irvine, and I can look back and easily describe the steady attack I faced while trying to hold true to my conservative principles. At UC Irvine last year, three members of a student government subcommittee voted to remove the American flag from a campus building, noting it was flown in times of “colonialism and imperialism,” and that flags can serve as “weapons for nationalism,” and that “freedom of speech, in a space that aims to be as inclusive as possible, can be interpreted as hate speech.”

The decision was ultimately overturned after national uproar, but after the whirlwind died down, the students who “bravely” made the decision to boot the American flag were regarded as campus heroes.

Five minutes into an African-American studies class I took to fulfill my diversity requirement last fall, the professor made an announcement that one of the student government reps who had voted to remove the American flag was in our class. She proceeded to give her a hug in front of the entire class, and thanked her for standing up to “American colonialism and imperialism.”

The next 10 weeks consisted of the professor making disparaging remarks about Republicans, white people, the school’s chancellor, and anyone who didn’t believe that the police should be banned entirely.

You see, also at UC Irvine, there is a groundswell of support among campus activists to abolish the campus police department. According to an online petition circulated earlier this year by the Black Student Union, campus police are akin to “slave patrols.”

Back to my African-American studies class, where I had to write essays that went against my own personal beliefs because the professor was so vitriolic in her attacks against Republicans I was afraid to out myself as a member of the College Republicans and possibly flunk the course.

But I only lasted one day in a different course on U.S.-Mexico relations. On the first day of class, the professor asked every single student why they took it, and proceeded to correct them individually if their motive was not progressive enough. Yes – literally student by student, row by row.

She told one student he was not truly Mexican because he did not understand the struggles of “undocumented students,” and she forced us on Day One to write about the “violent nature” of the U.S. Border Patrol. (Perhaps it is no surprise then that at UC Irvine last fall the Border Patrol backed out of campus career fair after a student petition called the agency unsafe and offensive.) As for the U.S.-Mexico class, I couldn’t stand another day. I dropped.

In my biology class last winter, my professor went on an off-topic rant on gun control right after the San Bernardino shootings in which 14 people were killed and 22 injured in an ISIS-inspired terrorist attack.

“Who’s the big culprit of this?” my professor asked rhetorically. “It’s the NRA – the National Rifle Association – which is enormously powerful in this country, in a way that you and I can’t imagine.”

Even as a finance major, I have never had a professor who seemed openly conservative or praised capitalism.

There’s other examples, too. The website for our Cross Cultural Center boasts an image of Che Guevara alongside the likes of Martin Luther King Jr. and Rosa Parks. What an insult to their memory. Che murdered friends who didn’t reject democracy, murdered starving children in his guerrilla camps for allegedly stealing food, and wrote a book that describes the best ways to murder people. Then there’s emails we get as a campus community which have contained everything from condemnation of Republican presidential candidates to direct attacks on the College Republicans for hosting Milo Yiannopolous, a gay conservative immigrant.

More recently, the College Republicans at UC Irvine were effectively suspended from hosting events during the upcoming school year over a paperwork SNAFU used as a cover to squash our First Amendment rights after campus leaders were furious over the Yiannopolous speech. Thankfully, we fought that decision hard and campus leaders repealed the sanction.

This is one tale, my experiences at UC Irvine. And frankly, it’s only scratching the surface.

But ask any right-leaning student at any other college if they have similar stories to share, and the answer is undoubtedly yes.

Many students start school with open minds, and leave four years later crushed in debt and with twisted and tarnished views of America, capitalism, the Founding Fathers, Republicans, police officers, the military and more.

I have stayed true to my conservative principles and will graduate with them intact. I am thankful my parents gave me such a strong foundation to draw from when my beliefs were attacked.

Universities were intended to be places for open discussion and the exchange of ideas. They have become four-year indoctrination camps with the goal of corrupting right-leaning young people. For students, it’s a death by 1,000 cuts, and all too often, it succeeds.