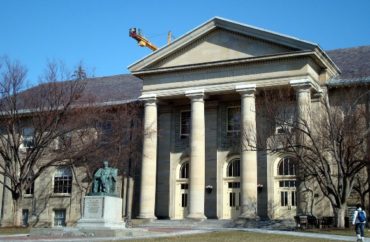 The Department of Literatures in English at Cornell University, formerly the Department of English, introduced a new curriculum this fall with course requirements updated to promote the study of works beyond British and American classics.

“Revolving around a theme of greater diversity within the department, the new curriculum reduces the department’s requirement for pre-1800 courses — which can cover any literature in English written before the 1800s — from three to two, and added two post-1800 course requirements,” The Cornell Sun reported Tuesday.

The College Fix reached out to Cornell’s media relations department by phone and email to ask for a copy of the new curriculum and general comment. It has not received a response.

The number of students majoring in English, now Department of Literatures in English, has dropped from 173 in 2019 to 134 in 2022, according to Cornell’s student enrollment data.

Students in the Class of 2025 can choose to follow the new curriculum track or stay with the old.

“I think it’s important that writers inculcate a global perspective in their writing,” first-year student Gabriel Levin told The Sun. “I also think that classical training is important. I think if students are able to balance the two, then there should be no problem.”

Miles Smith, a historian of the 19th Century United States and the Atlantic World at Hillsdale College, echoed Levin’s call to balance the new with the old, while cautioning against removing requirements of older works that provide valuable context.

“Moves to make literature departments more diverse are not wrong in themselves,” Smith told The College Fix. “Non-western authors writing in English deserve the attention of students.”

However, “decisions to remove older authors, especially those that precede the 19th Cent, might seem helpful in broadening diversity but in fact it closes off students to works that inform not only the development of the English language but also to works that have shaped how society and culture endure,” Smith continued.

New curriculum is ‘much truer to the renaming of the department,’ professor said

Seventy-five percent of the English faculty voted to change the department name to “The Department of Literatures in English” in 2020, following a proposal by faculty of color, according to an October 2020 article in The Cornell Sun.

The new name helped “eliminate what Director of Undergraduate Studies Prof. Kate McCullough, English, said was the ‘conflation of English as a language and English as a nationality,'” according to the paper.

“The decision to demand such a change was spurred by this summer’s resurgence of the Black Lives Matter movement following George Floyd’s death, according to Prof. Carole Boyce-Davies, English, one of the original proposal writers,” The Sun reported. “As a result, the faculty felt a sense of obligation to react in their own department.”

“Faculty around the country — not just faculty of color, but faculty in general — began to look at the institution to see how we can help advance a discourse that challenges structural forms of racism which get reproduced in students and in teaching over and over again,” Boyce-Davies told The Sun.

“Other faculty simply recognized that it was time that the department’s title represented what it was really focused on: literature written in English,” according to the paper.

The new 2022 curriculum “gives us something much truer to the renaming of the department as Literatures in English, taking that more seriously,” Professor Elisha Cohn told The Sun this November.

One course on a traditionally assigned author remains popular in the new curriculum: a class on Jane Austen, which will be taught in the spring by a new instructor, according to The Sun.

“It is a truth universally acknowledged, that students who have read Jane Austen must be in want of an opportunity to continue that delicious experience, and that those who have not read her novels should,” the Jane Austen course description reads. “By immersing ourselves in her fictional world we will enrich our experience of her novels and sharpen our awareness of the pleasures of reading.”

MORE: Black British conservative: Curriculum should be ‘knowledge rich’ and not focused on ‘decolonisation’