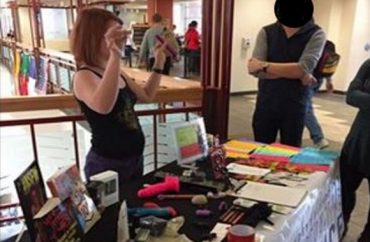 What, you thought students were going to cancel Sex Week over their election grief? They’re not THAT upset.

A picture of their display posted on Facebook showed their event offered all manner of insertables in various shapes, sizes and colors — complete with a helpful volunteer ready to offer how-tos.

The group’s “Sexuality Week” also included a visit from “Dirty Lola” and an identity panel. (Hey, with 78 genders to choose from on Facebook, it actually makes sense to find out if you’re pansexual or a grizzly bear.)

Here’s the point: Sex weeks have not gone away.

But it’s important to remember that, yes, the concerted effort to teach students that sex doesn’t have consequences and whatever-feels-good-do-it is still alive and kicking. (Keep that in mind the next time you send in a tuition check.)

At UNM, their sex week ends with a drag show finale. A student asked if she should cover it for The College Fix. I politely declined, mentioning that people don’t even seem to get upset anymore at the dozen-plus CATHOLIC universities that host drag shows, so they’ll barely bat an eyelash at a public university hosting one.

Here’s a thought: Is the reason Trump was not taken down by his vulgar comments against women because women have become pieces of meat? Swipe right for sex. Be used and tossed aside. Women, pretend like you like it (you’re supposed to be tough and uncaring, equal to a man, remember?)

As the old saying goes, be careful what you wish for.

But don’t be too discouraged. That’s because, after UNM students in 2014 debuted sex week with workshops titled “How to be a Gentleman and Still Get Laid” and “How to Have a Successful Threesomes,” one student group fought back by saying #NotAllCollegeGirls are interested in casual sex — nor think it’s healthy.

Earlier this year, the “Real Sex Week” was organized by Students for Life UNM, offering panels that teach one-night stands actually do have an impact on women’s psyches, as well as meetings on STDs, “Pregnant and Parenting Support,” and a healing from sexual assault and abortion gathering.

There’s plans in the works to make “Real Sex Week” a nationalized event through Students For Life of America next year. Underscoring that, alternative “Sex Weeks” with similar, conservative themes have popped up in places such as Yale and Harvard, sometimes led by the Anscombe Society.

All hope is not lost for Generation Tinder.