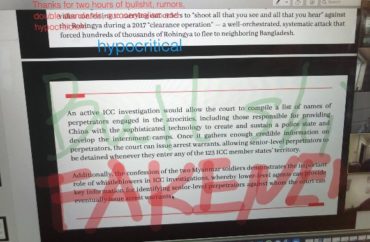 Crybully language in letter to Office of Diversity, Equity & Inclusion

When a different viewpoint offends you, try to deplatform it. If that doesn’t work, heckle until the person gives up.

This tried-and-true tactic of campus leftists was adopted by the Chinese Students and Scholars Association at Brandeis University in response to a Nov. 13 event promoted by the Graduate School of Arts and Sciences.

Titled “Cultural Genocide: An Overview of Uyghurs in Xinjiang, China,” the panel discussion was sponsored by the university’s Peace, Conflict, and Coexistence Studies Program and International Center for Ethics, Justice and Public Life.

It described Uyghers – Muslims in western China – as a “suppressed ethnic minority” who face “challenges to the very existence of their ethnicity.” The panel was to focus on “improving China’s treatments towards its ethnic minorities through international cooperation, political activism, and condemnation.”

According to The Brandeis Hoot, which interviewed participants after the event but didn’t view it live, the event was “Zoombombed multiple times with unknown attendees writing [‘FAKE NEWS’ and ‘Bullshit’] on slides and playing the [Chinese national] anthem.” Most participants had their video turned off, making it impossible to identify the virtual vandals.

They also tried to disrupt the other speakers a bit. Although we controlled who gets to speak as we were informed of the protests for our event, he bypassed and put the #Chinese national anthem. For me, it was a full on assault. I feared for my security but mostly for my brother.

Evidence suggests students involved with the Chinese Students and Scholars Association played a role in the disruption, given that a member posted a diatribe against the scheduled event on the club’s WeChat page and linked it.

The member predictably adopted the language of emotional safety wielded by campus crybullies:

However, concerns are raised about the negative influence this panel will bring to the Chinese community in Brandeis, since the information in the panel may be based on false or unconfirmed information. In addition, I think the word “Cultural Genocide” is very serious, which makes me feel uncomfortable. …

I hope that my concerns will be send to the people who are responsible for this event, and for all future panels about topics related China to be established on impartial standpoints. As a Chinese student in Brandeis University, I hope the university will respect my country and not treat it as a target for condemnation.

Georgetown panelist James Millward, a China historian who wrote a book on Xinjiang, called the Zoombombing a “coordinated disruption.”

He noted the WeChat post included a letter template addressed to the university president and Office of Diversity, Equity & Inclusion, asking them to cancel the event, but the university ignored the demands.

Voice of America said it confirmed the Brandeis offices received the same template shared by CSSA. It described the Chinese student organizations as “Beijing-supported overseas groups that provide support for visiting students and scholars, but also at times take up political issues on campuses.”

Over the past few years I've given dozens of seminars on this topic and this is the first time I've been disrupted this way. It's telling that the most offensive disruption was directed at a Uyghur (discussing internat'l law implications and her falsely incarcerated brother) pic.twitter.com/WOXt4kdFVP

The Foundation for Individual Rights in Education, which is tracking China’s global threat to academic discussion, thanked Brandeis for not shutting down the event after it drew complaints. Director of Targeted Advocacy Sarah McLaughlin wrote:

Universities should not be in the business of policing whether campus discussions are “impartial” on the topic of China or other subjects, nor should they interfere with campus community members’ right to speak openly about global political matters. …

This panel is not the first to face cancellation or disruption attempts for focusing on a topic sensitive to China, and it is unlikely to be the last. When other universities encounter demands that they interfere with an event due to its controversial nature, they should follow Brandeis’ lead.

If American universities stop protecting expression whenever it bothers Chinese students and their sponsors in Beijing, it’s increasingly unlikely those discussions can happen elsewhere, given the growing influence of China in many other countries, she said.