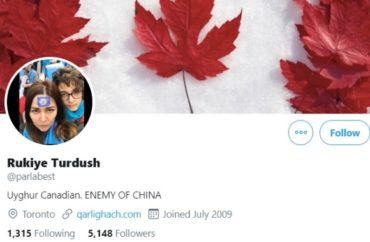 It’s not just Hong Kong’s democracy movement that is spurring tensions between China and the West. It’s also the communist country’s oppression of a Muslim minority.

McMaster University’s student government revoked recognition from the Chinese Students and Scholars Association for allegedly coordinating with the Chinese consulate to protest and harass a Uyghur activist who spoke on the Canadian campus, according to various media reports.

The South China Morning Post reports that the Student Representative Assembly accused the CSSA of violating its rules by reporting the February event with Rukiye Turdush (above) to the consulate in Toronto. Most of the assembly cosponsored the motion to derecognize the club last month.

The Washington Post “pieced together” what happened back in February, using records of a Chinese-language group chat, interviews with event attendees, video footage and a bulletin from CSSA:

It offers a vivid example of how Chinese students have grown into a vocal and coordinated force on Western campuses, monitoring and pushing back against speech they deem critical of China. It is of particular note because it is unusual to find written evidence of apparent coordination with officials. …

Turdush, the activist, said the experience left her unnerved.

As she was set to begin, she said, she saw a student standing at the back of the room, filming the door. As she delivered her presentation, she noticed another student filming her. “I felt like he was sent by the consulate to distract me,” she said.

Campus newspaper The Silhouette reports that the February event followed a few months after reports were published about “re-education camps” and mosque demolitions in the Uyghur-heavy region of Xinjiang.

There was no doubt that the CSSA tried to sic the Chinese government on Turdush, according to the newspaper. It issued a public statement Feb. 13 “accusing Turdush of inciting national hatred [and] stating that MACCSSA had contacted the Chinese consulate in Toronto about Turdush’s speech”:

Having anticipated the subject matter of the Turdush event, a group of Chinese students at McMaster created a group on the social media app WeChat specifically for the purpose of opposing the event. Student protestors filmed and protested against the Turdush event. Turdush herself was harassed.

The Silhouette said CSSA organizations outside China “have either openly admitted or been proven to be affiliated with the Chinese Communist Party,” including George Washington University’s CSSA.

The McMaster student government meeting where CSSA was derecognized included an “evidence report” and presentation that included a 2018 report by the United States-China Economic and Security Review Commission. That report said CSSA’s relationship to the Chinese government “appears to involve direct subordination and political direction rather than mere affiliation or cooperation.”

The representative who made the presentation, Simranjeet Singh, accused the club of trying to “intimidate students into avoiding discussions that criticized the Chinese regime.”

The university’s CSSA denied an “official” relationship with the government but admitted it had “cooperated with the Chinese embassy on issues related to cultural exchange and safety education for international students,” according to The Silhouette:

According to the [evidence] report, MACCSSA’s failure to fully report any links outside of the MSU was in direct violation of an MSU club operating policy. The policy in question required clubs to disclose any affiliations with bodies outside of the MSU.

Turdush came back to McMaster at the end of September, again at the invitation of McMaster Muslims for Peace and Justice, according to the paper. The club said the event drew “over 100 spectators and no disruptions.”

The vote to derecognize means the CSSA will “lose access to student union funding, booking room privileges and promotional tools,” according to the South China Morning Post.

MORE: 2 in 3 colleges with Confucius Institutes violated the law