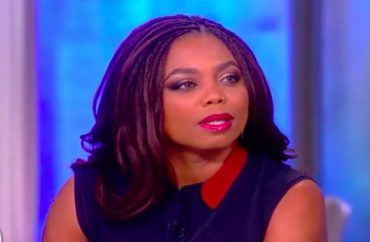 Naturally, she did not mean ideological or political representation.

The former ESPN reporter who is now with The Atlantic lamented how the lack of racial and ethnic diversity has affected coverage of the coming midterm elections, according to The Hatchet.

Though the report refers to Hill as an “award-winning journalist,” it does not note that she was forced out from ESPN due to her continual injection of politics into the sports network’s programming.

Hill told the audience of about 250 that she became a journalist “tell the truth” and “tell stories.” She criticized newsrooms for not “reflect[ing] what they’re covering,” meaning issues regarding non-white communities like “voter suppression.”

Since it is the the most common item brought up by the mainstream media when covering “voter suppression,” Hill presumably was referring to various voter ID requirements with regards to “suppression.”

Here’s where a little newsroom ideological diversity would crush Hill’s point: How often have you heard in the media that voter ID requirements are overwhelmingly supported … by minorities?

From the Hatchet article:

“If you’re going to cover underrepresented communities, your newsroom should look a lot different,” Hill said.

Hill said the lack of diversity within newsrooms and in sports media has negatively impacted news reporting, like the coverage of former San Francisco 49ers quarterback Colin Kaepernick in 2016. Kaepernick caused a firestorm for kneeling during the national anthem at football games as a protest against racial injustices – and Hill said the media contributed to the switch in conversation to focus on “patriotism rather than about police brutality.”

She said that today, the press wrongly avoids using headlines that include phrases like “white supremacist,” “white nationalist” and “Nazi sympathizers.”

“The whole basis of our profession is supposed to be truth,” Hill said. “If we can’t tell the truth, then we have not only lost our credibility, but we’ve lost your trust.”

In closing, Hill essentially invoked the main reason the media is held in such low esteem these days: advocacy instead of reporting.

“You cannot afford to be silent because you wake up and you see all these things happening,” Hill said. “You don’t want to be the person not listening and staying silent.”