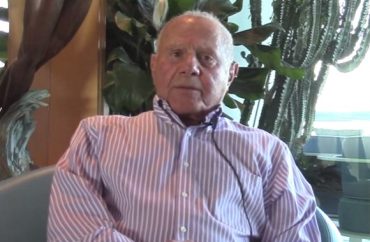 Meet the man behind the nation’s first atheism chair

A wealthy retired businessman who recently donated $2.2 million dollars to establish the nation’s first academic chair for the study of atheism, humanism and secular ethics at the University of Miami not only dislikes religion, but also Ronald Reagan.

Miami philanthropist Louis Appignani, who made the donation, said during a speech at the Southeast Regional Atheist Meeting in 2011 that “when Reagan took over it began the downfall of our country, and when Bush took over that was one of the final nails.”

He added “the cancer that exists in our society has to do with religion,” according to a YouTube video of his talk.

“I think the way this country is going, we’re not interested in science anymore,” Appignani also said. “… The cancer is with people’s thinking. I think it’s vitally important that all of us in our respective organizations somehow encourage secular free thought groups or free thought people who can think for themselves and not … pray to an almighty for solutions to complex problems.”

Certainly Appignani is not known to hide his views.

He founded the Appignani Foundation 15 years ago to promote humanism, and the group’s website states “the root cause of problems on earth can be attributed to differences of religion, race and nationalities. Non-acceptance promoted by faith based ideology must be replaced with rational scientific reasoning if the planet is to survive.” “Most intelligent, successful people think this way, [but] are just afraid to talk about it in public or admit it that they are openly secular,” he told Openly Secular in 2015.

UMiami philosophy Professor Harvey Siegel, who has been a friend of Appignani for years and played an active role in securing the donation, told The College Fix that the chair will not be in the business of “advocacy,” however.

“The Chair is a faculty position at the University of Miami, not an arm of the Appignani Foundation,” Siegel said in an email. “The Chair’s title involves the study of atheism, humanism and secular ethics, not advocacy.”

As for the launching of the Appignani Foundation Chair for the Study of Atheism, Humanism, and Secular Ethics underway at the University of Miami, “the holder of the chair is to (a) offer one course annually on the history, philosophy, and influence of atheism; (b) engage with the community (university and public); for example, through public lectures, forums, or conferences,” David Kling, professor and chair of the department of religious studies at the University of Miami, told The College Fix via email.

Kling added that the academic objective of the new position “would be to examine questions of science, knowledge, ethics, and social policy from a strictly atheistic perspective.” But Kling notes that, in reality, tackling education from a secular standpoint is not really a new thing to the halls of higher education.

“[F]rankly, [that] has been the approach of the academy for decades—which is to say, appeals to a divine source in explaining these phenomena are impermissible,” Kling stated in his email.

(In fact, during a 2015 interview with Openly Secular, Appignani acknowledged “I became secular mentally and intellectually my first week of college.”)

“There was great reluctance on the part of the university to have an endowed chair with the word ‘atheism’ in the name, and that was a deal-breaker for Lou,” Mr. Siegel told The New York Times. “He wasn’t going to do it unless it had the word atheism in it.”

A search for candidates is expected to begin this fall. The eventual chair holder will be selected by an interdisciplinary faculty search committee, professors told The Fix.