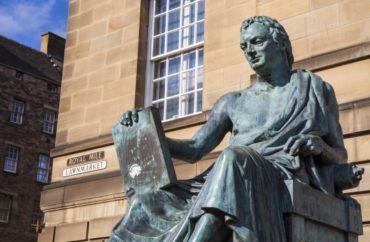 David Hume (1711-1776) may be the greatest philosopher Scotland ever produced, and one of the most influential minds of the Age of Enlightenment — but nevermind all that.

Hume’s “comments on matters of race, though not uncommon at the time, rightly cause distress today,” states University of Edinburgh officials in explaining why they’ve decided to strip his name from one of their buildings.

“From the start of the new academic year the David Hume Tower will be known as 40 George Square,” according to the statement, penned by the aptly named Equality & Diversity Committee and its Race Equality and Anti-Racist Subcommittee.

The 332-word statement does not mention if Hume will still be taught within the university’s philosophy department, however.

According to one scholar, “Hume is unquestionably one of the most influential philosophers of the Modern period.” The Edinburgh, Scotland-born philosopher is author of “A Treatise on Human Nature,” among other works.

While antiracism activists have cheered the decision to remove his name, according to local news reports, not everyone’s on board.

“By the criterian of this this stupid decision, the whole of Scotland in that period deserved moral condemnation,” Professor Emeritus Sir Tom Devine, a respected Scottish historian, told The Herald. He added:

David Hume was and is the greatest philosophical mind Scotland has every produced. His alma mater has now traduced him. The current Principal of Edinburgh should hang his head in absolute shame. On the other hand, Hume might be relieved that the David Hume Tower, the ugliest modern building, among several on the central campus, no longer bears his name, albeit temporarily.

Temporarily refers to the fact that the Equality & Diversity Committee and its Race Equality and Anti-Racist Subcommittee has stated the decision to remove Hume’s name is part of a larger review underway of campus building names. The university’s statement does not indicate when a final decision might be made.

The decision appears to have been influenced by a petition to “Rename David Hume Tower at UoE” that managed to garner a whopping 1,790 signatures as of Sunday night.

The petition accused the university of naming the tower after Hume for the sake of “alumni glory.”

“Nobody is demanding we erase David Hume from history. However, we should not be promoting a man who championed white supremacy. That is mutually exclusive with the goal of reducing the harm caused by racism at Edinburgh University to students of colour. We can take Hume’s writings and learn about them in context, but there is no reason the tallest building on campus should be named after him,” the petition stated.

The philosopher, historian and economist is credited with helping “to define the critical thinking which underpins modern science through his scepticism over the existence of religious miracles,” the Sunday Times reports.

As news about Hume spread, observers on Twitter weighed in.

My God. David Hume is cancelled. Shame on U of Edinburgh.”From the start of the new academic year the David Hume Tower will be known as George Square.” Why? His “views on matters of race, though not uncommon at the time, rightly cause distress today”
https://t.co/IDesE5bh9e

What a cowardly, stupid, craven, pathetic, spineless, dumb thing to do. Shame on them. https://t.co/3X6xBGu7pg

Now that cancel culture has come for Hume, I’d like to know if Hume scholars who’ve been advocating it for other figures and cultural artifacts also support it for Hume. I’d also like to know why these same individuals did not repudiate Hume earlier and waited until now.

Here is the Hume Society’s statement on Racial Violence and Injusticehttps://t.co/vtqMDlcXgg

Conspicuously overlooked is *any* statement on Hume’s views about slavery and race. If the Hume Society was sincere, they’d cancel themselves and disband.

The University of Edinburgh has stripped David Hume's name from a building because his opinions FROM THE 18TH CENTURY cause distress today. What kind of moronic and anachronistic narcissism causes a person to be distressed by the opinions of a philosopher from the 1700s?? pic.twitter.com/8YgZKyYEIq

The debate on Hume’s views took on new urgency in the wake of the George Floyd protests.

In July 2020 a piece in the philosophy-minded Daily Nous had asked: “Should We Continue to Honor Hume With Buildings and Statues?”