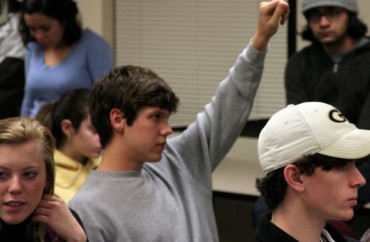 Long before Lawrence W. Reed became president of the Foundation for Economic Freedom, he worked as an economics professor for many years, so he has an acute understanding of the dynamics of classroom and campus discourse.

Recently he channeled that knowledge – combined with his decades of think tank leadership – into a new book: “Excuse Me, Professor: Challenging the Myths of Progressivism.”

The book provides statistics and arguments for students to challenge 52 common narratives they face from professors and peers on campus.

Speaking to a group of about 30 students at the headquarters of Young America’s Foundation in Reston, Va., on Friday, Reed held an in-depth discussion about some of the best arguments to help liberty triumph “Each chapter is intended to be a rebuttal with ammunition, intellectual ammunition for students in particular, but anybody to comeback and answer those myths and misconceptions,” Reed said.

Reed delved into several examples from his book, including:

1. “Jesus Christ was a progressive because he advocated income redistribution to help the poor.”

One of Reed’s personal favorite chapters in the book addresses the liberal notion that if Jesus Christ were alive today, he would probably endorse income redistribution.

But Jesus never endorsed the political redistribution of income, he said.

“He did urge that people should be caring and thoughtful and compassionate and responsible and to take care of your family and those around you,” Reed said. “But that was always a personal calling. He never said ‘You don’t have to worry about that, let’s just get the politicians to do it.'”

2. “The Great Depression was a calamity of unfettered capitalism.”

But Reed said that the government was not the innocent bystander in the years leading up to the depression. He pointed to the Federal Reserve, which he said was pumping up the economy by driving interest rates to historic lows throughout the “Roaring Twenties” through buying government bonds and injecting the financial system with liquidity.

“But the problem with that is that stuff is never sustainable,” Reed said. It is artificial.

“[The unsustainable interest rates] created a bubble which was burst in 1929.”

Reed added that the stock market crash was only a symptom of the Great Depression, not the cause. He noted that the Fed started to raise its interest rates in early 1929, and that the Stock Market began to moderately decline until its crash in October of that year.

“The stock market decline was reflecting the change in the Fed policy,” Reed said. “Just as the market had gone through the roof as the Fed was boosting up money supply. When the fed started to contract the money supply, the stock market reflected that change in policy.”

3. “If FDR’s New Deal didn’t end the depression, then World War II did.”

It is often a narrative that putting millions of people into defense-related jobs after the United States entered World War II ultimately ended the Great Depression.

According to Reed, this is not the case.

Pulling 11 million people out of the work force and inserting people into war-related jobs significantly lowered the unemployment rate, but the economy was not growing, Reed said.

He said one of the main ingredients for ending the Great Depression was the slashing of corporate tax rates to 38 percent.

“If businesses realize they will get to keep more of their money, don’t you think this will shape their risk-taking?” Reed asked.

4. “The minimum wage helps the poor.”

There have been increased calls around the country to raise the federal minimum wage after Seattle raised its minimum wage to $15 an hour. But Reed said such a raise would hurt the very people it intends to help.

“If the government declares that $15 is the minimum and nobody can pay any less than that, you have to ask ‘Does that mean that every job is automatically worth, to any employer, $15? There is no such thing as a job that is only worth $10?'”

“A minimum wage of $15 an hour says to workers ‘If you can’t find a job that pays at least $15 an hour, you are not allowed to work.’ It is a direct assault on freedom of contract and for opportunities for people with low skills and those just starting out in the job market.”

The Jungle, written by socialist author Upton Sinclair, is frequently championed as a credible news source that provided insight into an unscrupulous meatpacking industry. But Reed reminds readers of one thing in his book: The Jungle is a novel.

“Upton Sinclair never, even himself, contended that his book was any kind of documentary,” Reed said. “It is a novel. It is a work of fiction.”

“Why did he write the book? He made it quite plain. He wanted people to get angry with capitalism and embrace socialism.”

Reed also raised the question of whether Sinclair’s critique was founded in fact. He noted that people in the book were being grounded up and killed by machines on the job, which has become largely accepted as fact today and remains unquestioned.

6. “Profit is evidence of suspicious behavior.”

Reed said liberals will often target businesses and accuse them of only being “in it for the money.”

But what else should they be in it for, he questions. To be nice?

Profit is a measure of the extent to which a firm can control its costs and succeed in convincing consumers that its product or service is worth buying, Reed said. In a free and competitive market, it is a great motivator.

Reed pointed to an old McDonald’s slogan that said, “We do it all for you.”

“I am under no illusion that they are a charitable institution,” Reed said. “They don’t supply me with cheeseburgers because they know me or they like me. But this is how they get ahead, by serving me as a consumer.”

Equality before the law is essential, in terms of how it is applied to people, Reed said. He acknowledged while the United States has some shortcomings in that area, it is still more successful than most other countries.

But once we get as close to that goal as we can, people are not equal, Reed said, which inevitably results in people making different amounts of money.

“Should we expect that it would be a better world if everybody made the same and possessed the same in material wealth irrespective of their contributions to the market place?”

Reed added that if everyone were made economically equal tonight, they would be unequal tomorrow, as some would spend money, while others would not.

Additional chapters in the book are titled: “Healthcare is a right,” “I prefer security to freedom” and “The solution to overpopulation is population control.”

Along with reading his book, Reed encouraged students to read as much as they can while in college to “build a storehouse of knowledge.”

“Use your time in college to read as profusely as you can, because you will never have the kind of time to do that later in life, typically,” he said.

He added that learning how to persuade others of a position is also an essential tool in the fight.

“It is important to understand how to persuade and how to advocate, because you can be a massive treasury of knowledge, but you might be completely ineffective in convincing other people if you are arrogant, or rough, or if you don’t exude empathy for their position,” Reed said.